Late last month some residents of Park Slope secured themselves a Community Board meeting with CB6 to air their complaints about Union Hall, and attempt to stop their liquor license from getting renewed. The meeting took place last night, lasted more than two hours, and to everyone's surprise -- the board voted against Union Hall. The vote of six to two (with two abstentions) means CB6 will advise the State Liquor Authority (SLA) against renewing the liquor license of Union Hall. 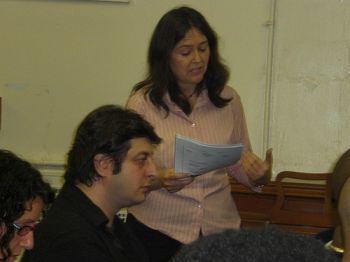 The meeting was mostly an open forum for the Board to hear voices in favor of and against the bar/venue's presence in the neighborhood. The voices against were predominantly residents of the Union Avenue block Union Hall is located at, led by community activist Jon Crow (aka "Old Man Crow"). The supporters of the bar consisted of patrons, employees, and regular performers at the venue including Michael Showalter and Eugene Mirman (pronounced by the Board "MEER-min") who ended his testimonial by asking the angered but wealthy residents of Park Slope, "Can I borrow some money?"

The residents were by far the more animated (and dramatic) of the two groups, regularly being called to order as they would heckle Hall supporters with everything from indignant responses ("Why don't you hold your quiet science fair at three AM while I'm trying to get some sleep?!") to outright heckles (standing and shouting "Sneak!" at one of the owners, audibly calling another speaker a "jerkoff"). Easily the most livid neighbor of Union Hall to speak was Roberta Lehrner, who painted a picture of her block coming full circle from the "prostitutes and gypsies" she helped clean off the street to current female patrons of the bar that she could hear outside her window yelling, "F-me! F-me!" One has to wonder if Crow & Co. are just acting out against the stroller ban.

Union Hall's owners demonstrated plenty of evidence as to how much they've bent over backwards to appease griping residents, regularly attempting to set up meetings to hear their complaints and installing soundproofing. There was a large outpouring of support from locals who made the case that Union Hall was more than just a bar, bringing Nobel Prize winners to Brooklyn for a fraction of the price it would cost to see them at somewhere like the 92nd Street Y. However the Board made the point that of all the many supporters of Union Hall (more coming out to speak for than against it), none of them actually lived within 200 feet of the bar where people were most affected by its late night noise (some even complaining of health issues caused by sleep deprivation).

The Board's advice will now be taken into account at the SLA's liquor license renewal meeting on May 31st. But both the CB6 and the complaining neighbors consistently acknowledged that the vote was only a minor victory since the general expectation is that the SLA will still renew the license as residents have little history of success when it comes to shutting establishments down.