With September at a near close, we hereby pronounce it the month of 40 Bond. While stories on hotelier Ian Schrager's second foray into residential development started appearing in 2006, interest ratcheted up this month with a slew of closings (Ricky Martin's moving in). Then this week, NY Magazine and The New York Sun devoted even more ink to it.

40 Bond reinforces Schrager's knack for reinvention. In a city where glass condos are the development du jour, Schrager - and Swiss architects Herzog and de Meuron - takes the concept even further. New Yorker architecture critic Paul Goldberger described the exterior as, "large plate-glass windows separated by heavy, rounded glass columns - a shimmery, twenty-first-century version of SoHo's cast-iron facades." Somehow Schrager has found a way to reinvent not only the cast-iron building, but also the ubiquitous glass condo.

At least one architecture critic, James Gardner at the Sun, described the building's design, which inherited an unremarkable 10-story grid, as "just banal" - and not ironically banal either. He said it also doesn't, despite the architects' best efforts, integrate with architecture already found in the five boroughs.

New York's Justin Keeperman takes the frenzy a tad far, comparing a visit to the Herzog & de Meuron building to a sexual encounter.

Here, in the firm’s first New York City project, that sensual richness acts as a more or less explicit come-on. Imagine, the façade murmurs, what splendors lie within. The narrow lobby—a passageway, really—takes the erotics of real estate a shade too literally: Enter, and you are squeezed between fleshy folds of Corian, ribbed with those ubiquitous organic patterns.

While we try to stay away from equating buildings with such things, we agree with that the ornate, cast aluminum gate - produced by a foundry, likely European, that manufactures artist sculptures - serves as very public (arguably contrived) art in a strangely semi-private setting. Gardner called it "simply tacky." 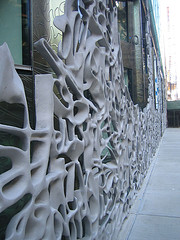 Here's what architect Jacques Herzog said was the firm's intention when designing it: “[W]hen we decided to do gates it was essential that they integrate with the New York street, we wanted to create something solid, rough and chaotic…so we began to experiment with New York City street graffiti which became the starting point of the design.”

As for the interiors of the 27 apartments, five townhouses and one penthouse, the ceilings are 11 feet, the windows are, natch, floor-to-ceiling and the floors, imported from Austria, are wide-planked smoked oak. The kitchens actually feature custom-designed, glacier white Corian, which means Corian is poised to be the new granite or, rather, the new stone. And, yes, there are Míele appliances.

Lush finishes aside, we need to see it firsthand, although we admit that we've always liked that green glass, old Coke bottle look.