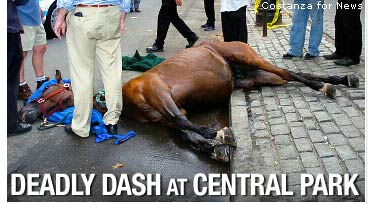 A 12-year-old carriage horse named Smoothie died after frightened on Central Park South yesterday afternoon. The Daily News reports that a breakdancing troupe cracked a snare drum, which made Smoothie rear up in fear. A witness said Smoothie was "in full gallop,", and the NY Times has a description of the terrified horse's reaction:

According to witnesses, a man walked past the horses while beating a small drum, which caused a brown horse that was hitched to a carriage to bolt onto the sidewalk, darting between two poles that were about two feet apart. The horse made it through but the carriage did not, and as the horse struggled to move forward, it collapsed and died, witnesses said.

“It fell into a panic and then fell on the ground, kicking,” said Roger Watkins, who was walking by and tried to help. “He kept shaking and then went into shock and collapsed.”

Another horse who was startled by Smoothie also ran into traffic and into a Mercedes-Benz. The car's driver told the Daily News, "It ran straight toward my car, it came face-first. I thought it was going run right up my car." Though second horse, the car's driver, and the car's passenger, as well as other pedestrians, were luckily uninjured, many people mourned Smoothie.

Last week, the City Comptroller William Thompson said that the city needed to strengthen its oversight of the carriage horse industry (for instance, there are no water spigots where carriage horses wait for passengers). His suggestions: "Creating an actual concession within Central Park, to house both carriage and pleasure horses.

Still, there are many people who simply believe that carriage horses do no belong in NYC, given the sad history of carriage horse accidents and deaths. The Coalition to Ban Horse Drawn Carriages has a petition and more information.

Photograph by the Daily News