Say Goodbye To The Most Enchanting Oddities Shop In NYC The disappearance of a beloved establishment naturally inspires the clichéd laments of "This city is not what it used to be." And then we go on. If it's a bar with roots to the old punk days that's lost, the patrons will land somewhere nearby and complain about the inferior jukebox. If it's a record store, well, there are other records stores, and records themselves are not unique.

But what happens when a store's ever-changing inventory has been and can only ever be the product of one person's aesthetic, and that guy decides to pack it in? Are we allowed then to say something is truly irreplaceable?

If so, then this is certainly the case with House of Cards and Curiosities, a 400 square foot nook on 8th Avenue with a red awning and a cluttered Narnia of a shop window full of taxidermy, shells, skulls, fossils, vulgar novelties and sacred tableau.

This enchanted, attic-like space between West 12th and Jane Streets will close its bell-strewn door forever on Memorial Day weekend; another victim of the all-too-slowly rebounding economy (many items are discounted by 50 percent until then).

"The place was quite successful until the crash," says owner and buyer James Waits, a scholarly man in his 60s who has worked in cards and gift shops on this end of the street since the very early '80s.

House of Cards itself has been in business for over twenty years in its little shady hiding place, next door to a lush garden. The closing of a nearby nursing home years ago, and the razing of St. Vincent's hospital ate into the greeting card market, and a loud and chaotic construction project nearby has steadily thinned out walk-in customers. "I turned the corner the end of last year," Waits says, "I wanted to get through Christmas. It wasn't a disaster, but it wasn't wonderful."

And so this June, Waits and his assistant Grace Hochstadt will begin to break down the store's meticulously arranged bins. They are currently full of tiny Buddha figures, wooden elephants, bone-carved frogs, doves, dice and butterflies.

Waits will stow away the Megaladon teeth (he's keeping those), and unspool the Babar stickers, unhook every glittering saint and monkey ornament and Chinese paper lantern from the ceiling, open the showcase and pack up all the skeletons, snakes and bats. He'll box the Loteria puzzles and snow globes, and insects of all sizes, frozen forever in amber or thick glass.

Eventually we will be able to find Waits's items in an online shop, but this will likely take a long while.

It's also utterly besides the point. House of Cards is an experience. It's a store meant to be felt with the fingertips and explored when you have no particular afternoon plans. What's really being lost here is not just another store but a way of shopping as thinking and imagining.

On a good day, those of a certain age can find their way back to their own more innocent years inside the narrow aisles. As a result, there are plenty of regular customers who already fear what's about to be lost (the more famous of them include actors Glenn Close, Alan Rickman, Ralph Fiennes, Lindsay Duncan and Edie Falco).

"I never thought that people would buy something without physically handling it, but they do. Lo and behold I do too," admits Waits. "But it's more pleasurable to flip through the bins. There's an adventure element to it." 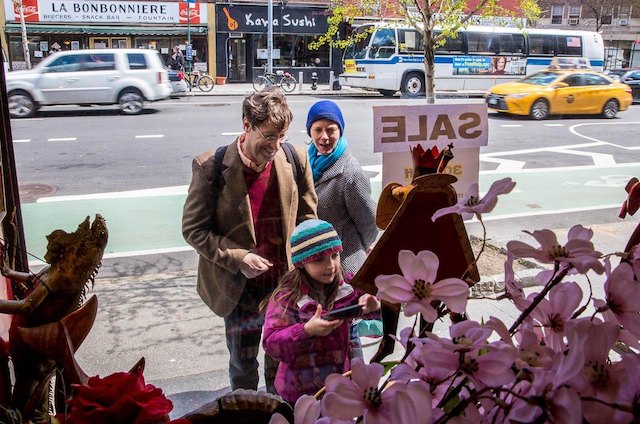 While House of Cards has its roots in a rougher Greenwich Village, once you meet Mr. Waits it's easy to see his shop as a kind of continuation of his own childhood in the American southwest.

A classical music student who studied piano and harpsichord, Waits found himself drawn to the earth sciences and biology.

"I had a museum in the basement," he says today of his formative years. "I remember boiling a coyote skull in my mother's double boiler. It stank up the house. But I still have it."

Waits eventually moved from Colorado to New York City to continue his studies. Even before formally taking over from his boss, he slowly assumed the duty of stocking the shelves from original proprietor Wendell Huston, and began experimenting with the stock, adding bits and pieces of ephemera to the more practical items like magazines, pens and postcards until they eventually consumed the entire inventory.

"I thought, what the hell? I will give this a shot. That was my attitude. I brought my own interests into it and it seemed to work. This place was quite successful."

At one point, there was even a real meteorite on display. If you were so inclined, you could walk out with both a rubber chicken and a Keichousaurus fossil ("Its an aquatic reptile from the Triassic period," Waits helpfully explains.)

Waits's southwestern upbringing saturates the store's energy, if you believe in such things. Day of the Dead skulls abound in every shape, size, and manner of costume, including a series of expensive, handmade retablo boxes. Outside is unmistakably Manhattan, but inside can bring to mind rural Mexico—or at least West Hollywood.

"I've always had a particular interest in Latin American especially pre-Colombian cultures. This stuff attracts me because it's very colorful and the skeletal stuff appeals to me," he says.

Other gateways to unexpected worlds usually come to light for the shopper, lured in perhaps by the window—Waits arranges the displays himself and they usually take a full day to complete.

It's why the store has consistently been a favorite of children, many of them the offspring of older customers, more open to the macabre but witty spectrum of children's literature (think Edward Gorey).

"If you grow up and somebody's always saying, 'Eww, spiders,' then it's dark," Waits says. "But if you're left alone, there's this curiosity. That's why it's called a 'curiosity'."

Whatever the landlord's shunt in next, those who remember Waits's store will never be able to walk down 8th Avenue, past the first edition book shop and the high end hot chocolate place, without feeling our true age; whatever we purchase online will arrive in a little box a few days later, bereft of spirit and story.

"When I was a science major and I had mathematics courses, I had to use a slide rule, and there's a certain element of mental discipline required in learning how to use a slide rule," Waits says by way of sharing a metaphor. "And then the calculator entered the scene and now you just have to punch a button to get your answers.  I'm kind of in favor of people learning the discipline then having use of the tool later."

Marc Spitz is a New York based author, journalist and playwright.

#house of cards
#west village
#longform
#original
Do you know the scoop? Comment below or Send us a Tip