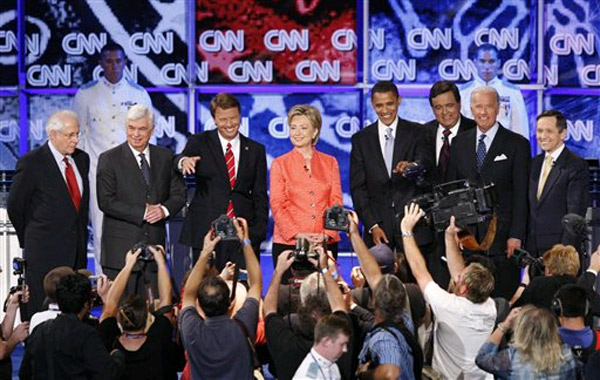 Senator Hillary Clinton has never been on the cutting edge of fashion. Nor was she ever meant to be (okay, she was on the cover of Vogue in 1998) and she's poked fun at her fashion choices (have pantsuit, can rule the world) before. But this past week, everyone's got an opinion about her style.

During the Democrats' YouTube debate, when asked what he didn't like about the junior Senator from New York, Senator John Edwards said he wasn't "sure about that coat" referring to a coral jacket that stood out in a sea of staid grays, blacks and blues the male Democratic presidential hopefuls were in. What, he didn't want to let his wife to chime in? 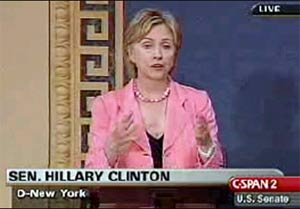 And then there's the hubbub over Pulitzer Prize-winning Washington Post fashion critic Robin Givhan's analysis of Clinton's slightly low-cut shirt (under a suit jacket), worn while at the Senate: "It was startling to see that small acknowledgment of sexuality and femininity peeking out of the conservative -- aesthetically speaking -- environment of Congress."

Clinton's aide Ann Lewis sent a letter fuming about the "grossly inappropriate" story, "Frankly, focusing on women's bodies instead of their ideas is insulting. It's insulting to every woman who has ever tried to be taken seriously in a business meeting." Seriously, who wants to think about Clinton's cleavage anyway? Let's focus on Fred Thompson's smoking trophy wife! Or John Edwards' $400 haircuts. Or how Rudy Giuliani no longer has a combover.