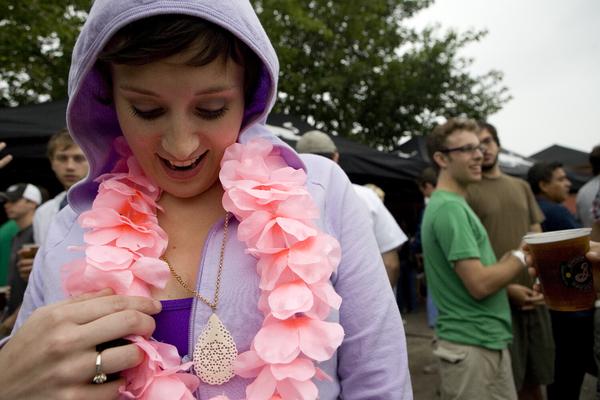 Along with Doug DeFalco, Sarah Hooper co-runs JellyNYC -- the company that brings free concerts to McCarren Park Pool each Sunday of the summer. With the space undergoing some changes in the future, we checked in with Hooper on the status of the parties and where they may go when the empty pool gets filled with water again. Good news: Marty Markowitz promises they'll be sticking around..and could possibly have a water view.

How do you feel about the pool being turned back into a pool? The whole point of the gifts we make to parks each summer was for the refurbishment of the McCarren Park Pool. Yes, I didn’t really realize that would mean it would be turned completely back into a pool and no more concerts there, but at the same time, it would be totally two faced to say we’re doing this for the community, and not be excited for the community to receive something else it really needs. That being said, we are sad, even yesterday at the first one, I had to blink back a couple tears, but we’re confident that the future is a good one for this series.

Do you have spaces in mind for similar shows next year? Yes we do, The Open Space Alliance, Parks Department and even Marty Markowitz’s office has been very clear that there will be a space for concerts no matter what in Williamsburg. It looks more and more like that will become the Williamsburg waterfront, but I’m just hoping wherever it is that it's a little less hot than 50,000 square feet of concrete! It literally is at the point where we all look like we’re at a waterpark all day from trying to stay cool—either a quick juant down the Slip ‘n Slide,a bottle of water over the head, or finding whichever sponsor has provided a misting fan and sitting there until I’m soaked!

Any prospects for a space that you can talk about? As well, since there is no McCarren next year, we have decided to take Pool Parties national. Instead of the whole typical tour idea or NY/LA/Chicago route, we are going to be focusing more on communities that have a similar feel and vibe to the parts of Williamsburg we love (or used to love before condos took over haha!)—the community, artistic presence, and cities with a little something special to offer in terms of weird venues. We will be announcing these soon, so be on the lookout! Keep checking in to www.PoolParties.com as well for up to the minute updates on this year as well as our future! But as always, they will all be FREE and will all have a Slip n Slide:)!

How many people work on making each show happen? Depends, our office is a small storefront on Metropolitan Avenue with 5 total people, yep that’s just 5 people who work all year to plan this little shindig. BUT that being said, these shows would never happen without out awesome Pool Parties family which consists of the Music First sound guys (has yoru sound guy ever climbed Mount Everest, I don’t think so!), Shaw Promotions (love these guys, best at getting the word out). UG Strategies (new to the fam this year, but a great addition), Tell All Your Friends PR (hi Kip!), our designers both The Boxing Club in Austin and We Are Familiar for web in NYC, our beloved sponsors that make it possible to have free shows (thank you RedBull, TOPSHOP/TOPMAN, Scion, Myspace, Gibson, Fuze, Saucony, SESAC, Sixpoint Ale, Hoegaarden, New York Magazine, KEXP and SPIN!), and finally our staff of both longtime workers and volunteers who make it possible for 5 people in a tiny office to handle 7,000 in a 50,000 square foot abandoned swimming pool! Love to them all!

What's would be your ultimate line-up? Oh Lord, for me or our office? As a whole, we are very diverse, from crazy stoner metal (Dan, our office manager) to bluegrass (Doug, the booker) to eighties hiphop (Alex, JELLYNYC founder, and his love for De La).

For me, I would have to say that many our our bills come close this year, Ronnie Spector??? Liars/Fuckbuttons/Team Ropbespierre??

I guess just take one of those and add Bowie and Loretta Lynn doing a duet of “Moonage Daydream” and Crystal Castles somewhere in there making everyone sweat...I mean you said ultimate, it doesn’t have to make sense yes?;)

Please share your strangest "only in New York" story. Hmmm...would have to be the first time I saw a baby with pink hair and a Bad Brains onesie. I’m from the South, you just DON’T get that in Alabama.

Which New Yorker do you most admire? Hard to say, as someone who wasn’t born here, I’d personally have to say someone like Steve Buschemi, someone who forewent the glitz, just had a great career, an amazing family and focused on what was important in life instead of getting caught in the hype, which is easy to do here.

My favorite people are the ones who came here and didn’t become someone else just to appease this place. It is a hard place to live and survive, and kudos to all of us who do it without sacrificing our selves.

Given the opportunity, how would you change New York? There’s so many political things to say here and honestly, I don’t feel like going on a diatribe (I am doing this interview the day after a Pool Party and am pretty damn tired:)), BUT I just wish that there were more people who were rewarded for being good, honest, hardworking and creative people. Sometimes it seems the douchier you are in this city, the farther you go. I wish everyone had to just go wait tables for a year just to know what’s it like to be in a position of service and not always have everything handed to you...

Under what circumstance have you thought about leaving New York? Under many—every time I get snotcicles in the winter because the wind is so cold and awful, when I sit at the grocery store and wonder. “Hmmm....cat litter or milk? Too heavy with both!” And anytime I see anyone I love going through pain because they are just a creative person trying to survive in place that has gobbled people up and spit them out for centuries. I think its a love/hate relationship for everyone here, but as we know so well at the Pool, one summer day, when the temperature is just perfect and then your favorite band plays your favorite song right as the sun goes down? Or when you’re riding over the bridge in a taxi after a long dinner with friends...or even just an afternoon in the park knowing everything you’ve ever dreamed about all somehow feels within reach? That’s what makes New York so magical.

Do you have a favorite New York celebrity sighting or encounter? Betsey Johnson, on the street in a bright blue tutu and yellow headband/hat contraption like its no big deal. Love it!

What's your current soundtrack to the city? I’ve been missing home lately, so have actually been listening to a lot of old country, fold and bluegrass (plus by boyfriend is a hardcore punk fan so I get enough of that at home, like to mellow out when I’m on my own). But there is this amazing bluegrass band called the Carolina Chocolate Drops I saw recently and bought their music right away. Such a joy to listen to!

Best venue to see music. The Pool!!!!! As well, Death by Audio because I like the way it feels when there is an air of “anything can happen”, which from the pot smoke drifting through to the fact the band is right there, able to punch you if you’re being an asshole, and then having to buy a forty on the corner so you can drink? Rock and roll to me...

#interview
#jellynyc
#McCarren Park Pool
#pool parties
#Sarah Hooper
Do you know the scoop? Send us a Tip
A new Gothamist is coming! We’ve moved comments over to our beta site. Click here to join the conversation and get a preview of our new website.