SantaCon Founder To Santas: "Go Do Something Else"

Last year over 35,000 people amassed in NYC to participate in SantaCon. Reports of bad behavior prompted a lieutenant in a Hell's Kitchen police precinct to write a warning letter to area bars. An "official" SantaCon Twitter account had to remind followers that "no means no." Police Commissioner Kelly later said that the city has no beef with SantaCon, but the message was clear: has SantaCon gotten completely out of hand? How will it manage thousands more Santas? What does the founder of SantaCon, who started the tradition in 1994, think of the current iteration? "I wouldn't care if New York banned it. I don't like the violence or the assholishness that happens."

Santa Number One, who is also known as Santa Rob, asked us to maintain his veil of anonymity so that he may speak freely. "I like it when you do an event and there are problems. People learn how to deal with issues by getting in trouble. New York got in trouble. They had a lot of fun. Now, go do something else."

If you think that relieving your bladder or stomach in the street is crass, you should hear what the original 38, San Francisco-based Santas did in 1994. Back then it was organized by a group of absurdist pranksters called The San Francisco Cacophony Society. Invoking the term "Santarchy," these Santas were trying to get thrown out of bars. They handed out gift bags like "Santa's Heroin Cooker Kit," which included little white rocks, a spoon, a toy syringe, and matches. They brandished starter pistols.

One Santa even got "lynched" in the street for "trying to go union," and hanged (with a hidden harness) from a stoplight fifteen feet in the air. 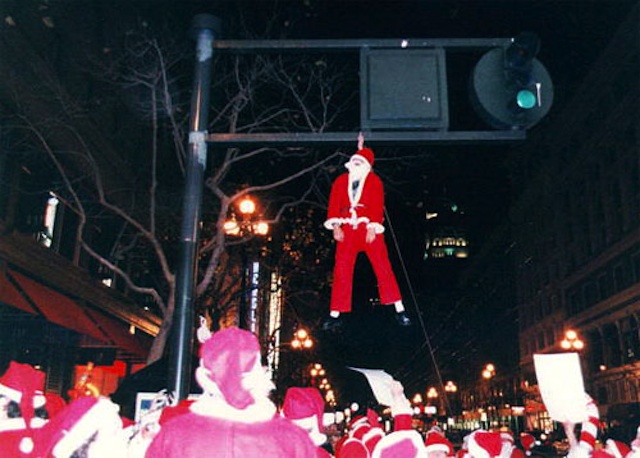 We can blame the Danes for all this. The idea for SantaCon was originally inspired by a Mother Jones article about a Danish activist-theater group called Solvognen, who in 1974 created an army of seventy Santa Clauses that invaded a department store and began handing "presents" off the shelves to passing customers. They were subsequently accosted and roughed-up by police. "The performance exposed the radical implications of the myth of Santa Claus’ boundless generosity, demonstrating that true generosity is impossible within the narrow terms of capitalist society," one Danish scholar notes.

Twenty years after their demonstration, the memory of that newsclipping and a postcard of Santas in a leather bar gave an instigator in the Cacophony Society a notion.

Some of the society's exploits are described in a recent book, Tales of the San Francisco Cacophony Society, edited by Kevin Evans, Carrie Galbraith, and John Law. I recently spoke to Law, the best-known of the Cacophonists, who helped implement the plan. Because he's outed himself for the sake of history, Law will be the only Santa named herein. 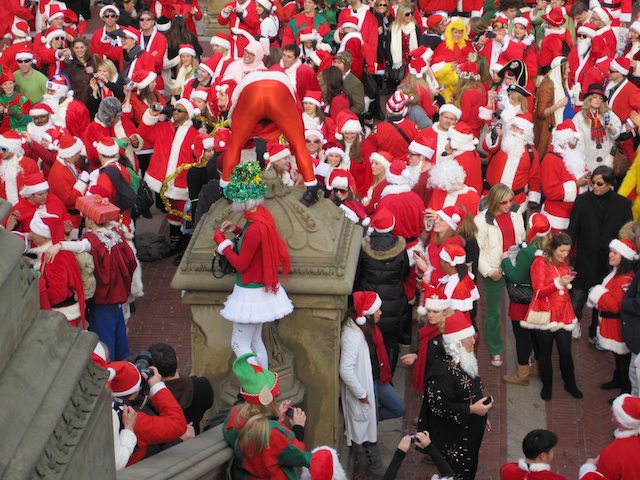 "I've hated Christmas ever since I was nine years old," said Law, "when I found out Santa Claus was bunk. It sounds silly I know, and I understand and value the desire for family and for culture to get together for a common reason. But starting with the Holy Roman Empire's manipulation of the Jesus myth, to commercial interests in the 19th century pairing it with this unrelated folk figure in a bid to drive wintertime sales…it's a fat fucking lie and I don't like it. So it was like, 'We can completely take this stupid Santa thing and make it our own.'"

"The thing that was so amazing early on," he continued, "was that the concept of Santas running around wasn't in anybody's mind at the time. It wasn't a meme yet. Now you could be in Siberia and know the image, it's not as otherworldly. When we were thirty Santas walking through San Francisco, people were stunned. It was a beautiful thing."

Law's last SantaCon, in 1998, was New York's first, and he went out with a bang. "I did it for five years in a row and was like, 'That was fun, but now it's started to retread.' After Santa Dennis from Detroit and I climbed the Brooklyn Bridge cables with about 150 Santas down on the walkway, that was it; I was kinda done. "

Apparently, the rest of the world wasn't. The event now takes place in almost four hundred locations in forty countries, from Boise to Singapore.

"We found that at one hundred Santas, it becomes a stupid mob," Law said. He added, however, that an ethos was developing: "Don't fuck with kids, don't fuck with the police." Even the infamous 1996 Portland event, organized in part by author and former Cacophonist Chuck Palahniuk, resulted in exhausted cops saying, after a weekend of chasing Santa, "Could you please do something wrong so we can arrest you and go home?" 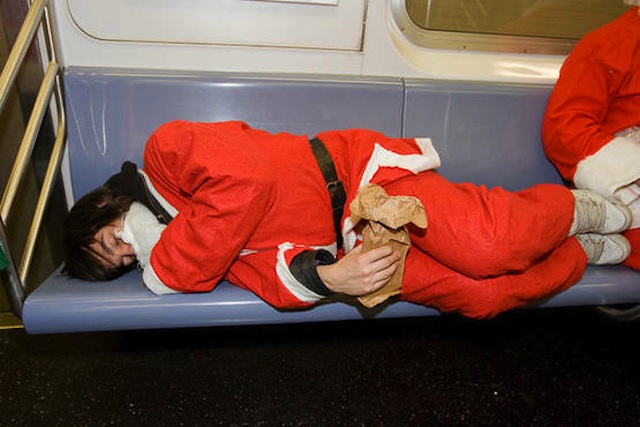 In 2005, it took weeks to organize routes and locations for just 4,000 Santas. Some bars didn't believe they'd be beyond capacity at 1 p.m. on a Saturday, and were overwhelmed. But even with Santas stripteasing on bar tops or having sex in the bathrooms, staff were tipped generously and the vibe was largely amicable.

"We wanted photo ops, and crowds and places where we could interact or play around," said the woman who was New York's lead Santa for that year. "Columbus Circle, Tavern on the Green… And that's when we still had 'reindeer games' like tug of war, or a giant fake snowball toppling Santas standing like bowling pins—not just drinking. And it snowed! To walk across the Brooklyn Bridge in the snow and end up in Central Park with thousands of people dressed in red on this beautiful field of white was just…I was crying how beautiful it was to see all the Santas."

How did the public and the police react? "They were taking as many pictures of us as we were of each other," the organizer said.

Early on, many of the participating Santas knew each other. Accountability in one's social circle acted as a check on boorish conduct. By 2005, that had changed. A few Santas began to use the anonymity that made the event so magical to cloak their abusive behavior. "You know in the back of your mind that those people exist, but you never expect them to be participating in the thing you're participating in. We didn't go to them, but now the lunkheads were coming to us." 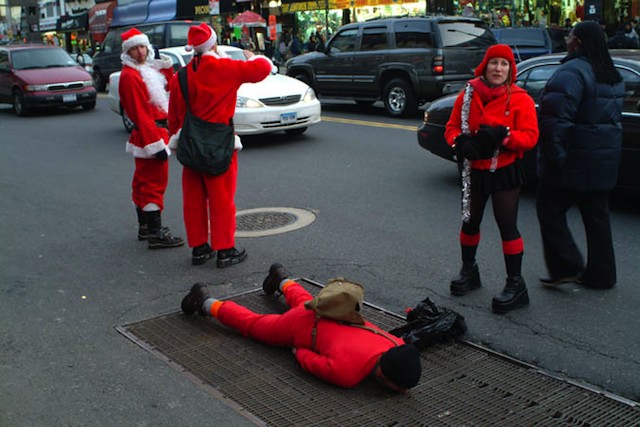 The lead organizer of this year's SantaCon is well aware of the challenges that await him on Saturday. "I think younger groups of people see it as an exciting day, but don't understand the creative impetus behind it," he says, offering his favorite SantaCon memory as an example.

"One year someone created a Santa court, set it up on a playground where they arrested Santas and charged them with various Christmas type violations, and issued sentences like a paddling from a naughty elf. It was real street theater, exactly in my mind what SantaCon is and should be about."

This year's organizer stressed that "education needs to happen in order to have the event continue. I reached out to police precincts, the parks department, state senators, the governor, and head of police, and had discussions as the organizer of SantaCon, which puts me up for a lot of liability. This is something that doesn't need to die, it needs to transform."

The 2013 NYC organizer also points to SantaCon's charitable function as a valid reason to keep the event around. "I also stand to make the largest donation to charity I could ever possibly make, and that's very meaningful to me as a person who believes in the power of charity. We signed up every bar in the East Village to give between 10-20% of their take to one of three charities we've chosen. And we're getting Santa to kick in ten bucks to be part of the real SantaCon," he says.

"If you want to know the real route, instead of the 'go hang out with your friends' route, donate to this spot online, and we'll send you secret Santa important stuff—all these fun large parties that people who donate will immediately get into."

Could Santa Number One have ever guessed it would get to this point?

"I always wanted people to have their ownership of Santa from the beginning. It's so anonymous. 'Who did this?' Santa. 'Who are you?' Santa. 'Who's in charge?' Santa. I don't think people realize how much the event is run by those who are the event. Back then you had to really get into it, it wasn't fed to you, with everything texted, so you know exactly everything that's going on—cell phones didn't exist."

The trick, Santa Number One says, is to safely maintain the anarchical spirit without feeling stale.

"By having that argument, or having politicians getting up and saying no to SantaCon, you're living. The fact that it causes so much trouble, that makes me happy a little bit."

Dan Glass is a New York-based journalist who has written about solar eclipse chasing, participatory culture, and dive bar art. His work has appeared in The New York Times, Wired.com, The Atlantic Cities, and the Los Angeles Times.