Sam Rockwell is a mercurial man. His resume is filled with characters that span the pantheon of human weirdness—goofy, intimidating, suave, sinister, mustachioed and almost always tinted with a hint of crazy. His new movie,

One thing I’ve noticed on IMDB is that you have like, seven films that have yet to be released that apparently you’ve done, so I'm wondering… Wow that’s a lot. I don’t know about that.

It sounds ridiculous. It sounds like a lot to you, too? I did some cameos in Clark Gregg's movie and Justin Long's movie. But that's more of a cameo situation.

I was going to say, I don’t know how a mere mortal could shoot seven movies like that. Yeah, I did some cameos and then I did a couple days on Clark's movie, and I was a producer on it. And I did a day, two days on Justin's movie. And then I've done a supporting role in a movie with Marisa Tomei, Brian Geraghty, Ivan Martin and Mike Godere.

And Poltergeist I heard—correct? Yeah, yeah, we're in the early talks here, working on the script negotiations—we'll see what happens.

I think everyone is looking forward to that. How do you feel about working on a remake of such a classic like that? We're changing it a little—like, the characters, so it's going to be different.

As for what you're doing right now. I watched a Single Shot, and it is a hell of a dark movie. It has possibly one of the darkest endings of any movie I've seen in recent memory. Yeah—very Edgar Allen Poe.

Do you find that doing darker movies weighs more heavily on you? No actually, we had a blast. I mean, aside from the commute—it was an hour commute each way. 'Cause you had to go to the forest to shoot the damn thing.

I guess they didn't put you up in tents or anything. Yeah, we had to drive from Vancouver to these very rural areas, but the director and I really hit it off, we had a blast. 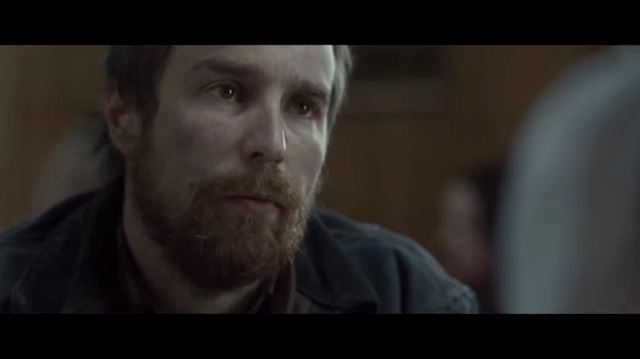 Those shots are beautiful but I'm sure it was a pain. There's kind of a cognitive dissonance between how stunning the landscape seems to be and then just how dark the movie itself was. I'm glad you saw that. I think David did a really great job—we shot on real film, which is rare these days. Everybody is shooting on digital, so I really thought the movie turned out beautiful. And it is a dark movie for everybody—it challenges the audience to kind of, you know—it's Crime and Punishment, you know what I mean? It's like, Tell Tale Heart.

The lighthearted shots were sort of few and far between, were there any scenes in particular that you remember being really fun to shoot? I imagine, maybe it had something to do with William H. Macy's toupee flying off?(Laughs) Yeah, we had a scene where Bill pissed himself. We made a little piss rig for him, and I point the gun at him and I guess they had to cut it for time or maybe it was too silly, but he was really going for it. It was fucking awesome. A whole Richard III thing.

Otherwise, working with Geoffrey Wright was a big thrill for me. It was really amazing—it's like an acting tutorial. It's like acting clinic watching him work.

I guess that's surprising considering you have such a lengthy filmography already under your belt—you still find that there's some fascinating things to watch people do? Yeah absolutely. You learn all the time.

Your most recent film is The Way, Way Back. Is it challenging at all for you to sort of switch between talking about a film like A Single Shot, and then talking about a much, much different film? No, not at all. They were shot around the same time. I did three in a
row—it was quite a few months there. I did A Single Shot—actually on those long commutes I was looking at my lines for another movie called Better Living Through Chemistry, and I shot that—I wrapped A Single Shot, and about two weeks later, I went to Annapolis to shoot that. And that was a lead role, and then I had about a week off. I visited my girlfriend in New Orleans, and then I came back and prepared for The Way, Way Back and had about ten days in between. Like, three in a row, like bang bang bang.

So you don't struggle with making that transition at all? It's not my favorite way to work. But, it was necessary, and you know, the film business has changed a lot and these things come together last minute. So then, Steve Carell and Tony signed on. Originally, it was just me and Allison Janney attached. And all of a sudden, things become very real and we're like "We're going to go, we’re going,” so, it’s kind of like either you're going to do it or not do it, so figure out a way to do it.

But it’s not the best way to work. I mean, I prepared four months for Confessions of a Dangerous Mind, ahead of time. I’m really very much about preparation. So, it’s not ideal, but you’ve got to make the best of what you’ve got.

Right, I guess work is work. Are there any instances in which you feel like you could've been better prepared if you hadn’t been juggling so many things? I guess there are. Maybe sometimes you just jump, you know, and just see what happens. You take a leap of faith, like Iron Man took a leap of faith, it wasn't really a script. And I went in and just, I trusted Jon Favreau and Justin Theroux to kind of guide me. Sometimes you just gotta jump.

You've done Box of Moonlight, 13 Moons, Moon, and now, as of A Single Shot, a character called John Moon. Is there a thing here? Do you have a particular interest in space, or just the moon generally? I think I don’t. It’s a very strange coincidence. I’m not really sure. I’ve done a few sci-fi movies, a couple of sci-fi comedies, sci-fi drama. I don’t know.

Is there a particular aspect of sci-fi that appeals to you? Well, I’m definitely a sci-fi fan. The best movie I saw all year was Star Trek, I think, the sequel. That was the best movie I’ve seen all year.

Really? Yeah, I really did. I thought that was like—I would say that, and I really liked Fruitvale Station. I liked The Conjuring, but Star Trek, really, I thought it was just pound-for-pound a great movie.

This is not exactly related to Star Trek or sci-fi, but, Star Wars, rather—a fascinating tidbit I read about you is that at one point, you dressed up as a Care Bear for George Lucas’s daughter. And I just don’t feel like there were nearly enough questions asked about where you procured a Care Bear costume. Is that something you just had in your house at the time? Well, no, it was supplied for me.

I figured maybe he solicited you for the job because you were the person he knew who happened to have a Care Bear costume. So why you, then? I was still in high school, he gave me 50 bucks to go there and sweat like a you-know-what.

That’s not a bad gig. Yeah.

Is that the weirdest job you've ever had? That’s pretty weird. I’ve done some weird jobs, for sure.

Do you have a second favorite? There was an agency that would call you for temp jobs, they called me and this guy—he was a friend of mine. And we'd go in and break up sheetrock and stuff. But they had us, one day, go in and clean up this house, take out all this stuff for somebody who had just died. An old woman had died so we had to go in there with masks and gloves and take shit out of the house. That was pretty creepy. And then, I was an elevator operator for a night. I was an intern for a private investigator for a while. I had some strange jobs. Busboy, barback, delivering burritos on a bicycle.

I guess, of the three, burrito delivery is the least weird. So last time we spoke with you, it was 2010 and you were in A Behanding in Spokaneon Broadway. Are you about due to return to theater? Yeah. I did a play about two summers ago—I did A Streetcar Named Desire at Williamstown with Jessica Hecht. I need to get back on the boards, for sure. I’ve got to find something. We’re thinking about something this summer. But, yeah. I want to do a couple of movies, and then maybe go do a play. I would love to do a play.

Do you find that doing plays breaks up the movie business at all? No, I find that you have to go do plays because it’s like going to the gym, kind of. It makes you stronger, a better actor.

I’m sure it’s true. It sounds like a really grueling—from my understanding, they’re both grueling processes, but it sounds like...It’s important, unless you’re just not into that kind of thing… But I think that for actors like me, and Billy Crudup, and Phil Hoffman, and Jeffrey Wright, and all these kinds guys who come from the theater, I think it’s important to go back and do it. Billy’s doing a play in Berkeley right now, he’s going to bring it to New York. Daniel Craig’s doing Betrayal, with his wife. And Daniel comes from the theater, he did it in London before he was famous. I think it’s important to get back in touch with that, and get a scared a little, and do that. I know it’s always scary for me to go and do that stuff.

You’ve done a really wide spectrum of characters—is there any one archetypal character in particular that you want to be cast as, but you haven’t had the chance yet? Yeah. I guess I could stand to do a romantic comedy. It might be, sort of, an odd one that I may be doing, coming up.

Along the romantic comedy lines? Yeah. A little bit.

Do you happen to dance in that one? Jesus Christ, I hope not.