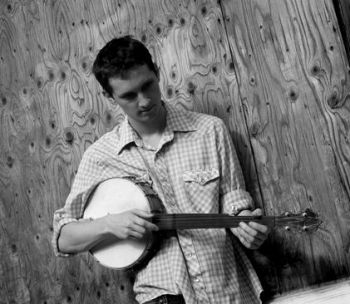 Brattleboro, Vermont native, and sometimes-New Yorker Sam Amidon has danced, crooned and plucked his way into many music lover's (and critic's) hearts. Seemingly influenced from everything he's absorbed in his 27 years, his demeanor emanates both innocence and experience--making even the traditional folk songs he delivers seem to be off-the-cuff during a live performance. Catch him tonight at the Lutheran Church of the Messiah in Greenpoint, and next Wednesday at Glasslands in Williamsburg.

How was the tour with Nico Muhly and Doveman? Oh man, it was fantastic. We had a grand old time blending our sets together so that instead of three separate sets, we'd segue (a word I only recently discovered is pronounced "segway," I always thought it was pronounced "seeg") from a Nico piece to a Doveman song to a folksong and around again. Our soundman Dan Bora was on the road with us and he taught us Chinese in the van. We are all fluent now.

Was there one specific show that stood out, or any particular experience on the road that's worth sharing? Well, we had a great show up in Toronto with our friend Owen/Final Fantasy. Stupidly enough, we had no official show in Vermont, which is stupid because we are all from Vermont and the tour was called "the 802 tour" because that is Vermont's lone area code. But we did do a little secret show there at Nico's parents' house for some people in the hood, that was wonderful because it was so beautiful up in the mountains and we had all eaten delicious food at the local diner that morning. Nico has recounted many of the more exotic tales of our tour on his blog, including encounters with an enormous breast, and near death by brush fire.

You seem to have an interesting recording/music-making process, can you talk about that a bit? It's come about haphazardly so far, I'd like to make some records that consist of people actually sitting around in a room making music together at some point. But for whatever reason the last two ("But This Chicken Proved Falsehearted," produced by Thomas Bartlett/Doveman, and "All is Well," produced by Valgeir Sigurdsson and arranged by Nico Muhly) were both made by me first putting down solo tracks of voice & guitar or banjo, and then those guys just adding things afterwards without me having any idea what they were going to do, or even hearing it until long afterwards. I like the field recording quality of that- where I just put the shit down in a simple oldtime way, and then what happened afterwards was highly accidental and confused, similar to the process a folksong goes through- somebody sings it, and then it's out of their hands and half of it gets forgotten, or embellished, or whatever.

Where do you find musical inspiration? In extreme boredom & idleness.

When did you begin making music? I have a tape my parents made of me singing children's songs when I was 2 and a half... I started playing the fiddle when I was 3.

How do you "pick" the traditional songs you sing? Very haphazardly. I don't have a particularly broad repertoire of songs. I go poring around... initially they were from an array of sources, field recordings, things I'd heard over the years. Now I'm getting lazy and I'm just stealing them from my parents.

Do you think growing up in Vermont has helped create your current sound? Certainly- there are a lot of aging hippies that moved there in the 70s and started playing folk music, and that is who I learned music from growing up. And at the same time, one of the first places I ever met Thomas (Doveman) was when we were 7 years old, at a concert that our dads took us to, by the David Moss Dense Band, which was this drummer who moved to Vermont from New York after playing with John Zorn, and it was a total downtown noise skronkfest. It was in this little theater in rural Marlborough, Vermont.

You've been known to dance at shows, and in your video -- how did that come about? I discovered it was the only consistent method for shutting up a loud audience - go and dance next to the offending audience members. Even better, dance with them!

If you could play at any (legal or illegal) space in New York, where would it be? I used to play a lot at the downtown platform for the B & C trains at 81st Street, I played old time music there with my friend Rhys Jones. It's a great place to play - trains come infrequently and it's a live space acoustically. That's a good place.

What bands are you currently listening to? Dirty Projectors, Ceramic Dog, the new record by the GZA, and the new R Kelly record for new music; Lennie Tristano, The Isley Brothers, and 80s Miles Davis (something I have a perverse fascination with) for old music.

Please share your strangest "only in New York" story. I would love to but i think it might be perceived as racially insensitive. But wow, it was really funny!

Please share your strangest "only in Vermont" story. I would love to but i think it might be perceived as - ah, what the hell... About a year ago I was walking down the street from my parent's house into downtown Brattleboro, my hometown. Brattleboro has a small downtown area with a lot of beautiful old brick buildings, watched over by Mount Wantastiquet, which rises picturesquely above the town on the other side of Connecticut River.

There is one street, in between my house and downtown, that has a small but burgeoning black population (as in, it has maybe gone from one black family to ten in the last ten years - Vermont is a white place). There were a few guys leaving their house and heading downtown just as I was walking by. As they and I walked simultaneously towards town and the mountain rising above it, I overheard as one of them, laughing, gestured towards the mountain and said "look at that shit. That shit is dePRESSing!" Another: "Damn, man. Imagine waking up to that shit every morning. Depressing."

Which New Yorker do you most admire? Dougie Bowne. Also Black Cherokee, the performance artist at the north end of the FDR Drive; Eamon O'Leary, an Irish-style tenor banjo player that I play a lot of trad sessions with; and my friend Indra, the first New Yorker I ever knew.

Given the opportunity, how would you change New York? I would have the city build a little time machine so that I could go visit this place in all its various past incarnations & phases.

Best venue to play/see music in New York. When I first came to New York I went to Tonic every single weekend to hear music, so that must have been my favorite place. But Tonic is gone now. For playing, I like Zebulon and Monkeytown in Williamsburg. As far as concert-going, I'm secretly a total jazz nerd and I love to go to the Village Vanguard when I can afford it, I love the shape of that room. I was there this past week to hear the Paul Motian-Bill Frisell-Joe Lovano trio and that was incredibly beautiful.

#interview
#musician
#sam amidon
Do you know the scoop? Send us a Tip