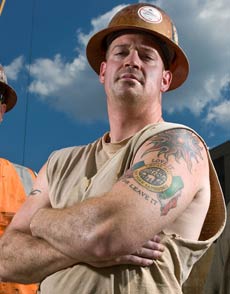 Ryan McGinty is a sandhog, a construction worker (or urban miner) who excavates bedrock beneath the city for projects like the Third Water Tunnel, the East Side Access Project, and the 7 Subway Line Extension. In order to keep the projects on track, the work is never done, with three 8-hour shifts a day. McGinty is a shift boss on the 7 Subway Line Extension in Manhattan and is one of the men featured in The History Channel's new program, "Sandhogs."

How long have you been a Sandhog?  How did you get started? I started in Oct 1997, so I've been doing this for 11 Years. I grew up with a close friend whose father was the business agent of the union, Local 147, the greatest union in the world.

What part of the project are you working on? I'm the foreman, also called the shift boss of the 7 Subway line extension.

Tell us about a typical day. My shift starts at 7am, but as the foreman, I'm down by 6:45 just to check on everything. To get down in the hole, you take the man cage, also called the bird cage. The cage the 7 Line site holds up to 9 people. It's hooked up to a crane which then lowers the cage down. At this stage of the job, we are between 135-140 below street level. Not everyday is set because there are three shifts so it really depends where the job is at.  Basically, a shift is either drilling or loading dynamite. My shift ends at 3pm.

How long does it take to remove a foot or a mile of earth? It all depends on the depth of the round that we are drilling, which is kind of hard to explain, but it takes three shifts, which is 24 hours to get 15feet.

What has been the biggest challenge? On this job, it's been challenging because there are a lot of new guys who've never drilled before, so when you have a lot of new guys learning how to drill and shoot, it makes it a little more dangerous.

Your work is incredibly dangerous--they say that for every mile, one Sandhog has died. What do you think before you enter the tunnel--and what do you think when you finish your shift? I'm thinking about getting the job done, that's the most important thing and as a foreman, I'm worried about my guys. I love being down there. At the end of the shift there's a sense of accomplishment knowing that I got the job done and I'm coming home safe. Sometimes you have the feeling that you are bottled and then you get up outside and really appreciate the fresh air.

How did you feel about having a camera crew in the tunnel with you? I wanted people to see what I did. It's a tribute to all the guys that died or broke their backs to be down there. So everyone can see what they did and what they sacrificed to feed their families.

What do you people say when you tell them what you do? What's one thing most NYers don't realize about the city they live and work in? People say I'm crazy and wonder why I do what I do.

People just don't realize the projects that are going on and how important they are to make the city run.

Are they any misconceptions that people have about Sandhogs? A lot of people don't even know what we are really about. But know that the show is on they'll know what we do.

Do you have a favorite subway and/or bridge? The old 7 line because I'm on the project now building the new one.

"Sandhogs" airs on The History Channel on Sundays at 10 p.m. For other looks at what it's like underground, here's a gallery of some photos and, over the summer, a Post reporter ventured in one of the tunnels.

#interview
#Ryan McGinty
#sandhog
#sandhogs
Do you know the scoop? Send us a Tip
A new Gothamist is coming! We’ve moved comments over to our beta site. Click here to join the conversation and get a preview of our new website.