Thursday night was a milestone for anyone who ever came home to find their newly purchased parrot was not just pining for the fjords. The remaining five members of Monty Python gathered for a rare reunion in honor of the theatrical version of their new film, “Monty Python: Almost the Truth (The Lawyer’s Cut)." The lengthier version will be showed over six nights next week on IFC, starting tomorrow night. John Cleese, Eric Idle, Terry Jones, Michael Palin and Terry Gilliam took the stage after the screening for a Q&A, with the late Graham Chapman represented by a large cardboard cutout. At least they didn't spill his ashes like they did at the Aspen Comedy Festival in 1998! 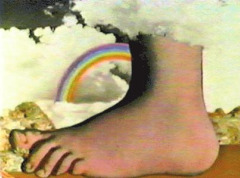 The group was in full comedic swing, playing off each other like old times. When questions got stale, the Post reports that they pretended to read questions like "Why isn't John funny anymore?" from a question card, and singing "Always Look on the Bright Side of Life," led by Idle on guitar. Also, a 10-year-old girl impersonated the "Spanish Inquisition" sketch, which is the cutest thing ever. At the end of the night, each member recieved an achievement in film and television from the British Academy of Film and Television Arts (BAFTA). Click here for a full video of last night's antics.

IFC will be showing a "Python-a-thon" all month, which in addition to the new film includes all four seasons of "Monty Python's Flying Circus," and classic Python films including "Monty Python and the Holy Grail," "Monty Python's Life of Brian" and "Monty Python Live at the Hollywood Bowl."

#ifc
#Monty Python
#reunion
Do you know the scoop? Comment below or Send us a Tip