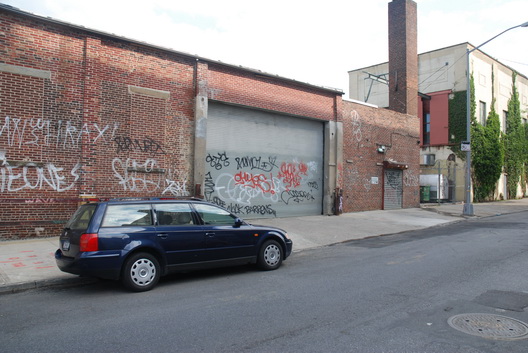 Last year a NY Times article announced that former Wetlands owner Peter Shapiro and manager Charley Ryan were opening up a 20,000-square-foot bowling alley/performance space in Williamsburg called Brooklyn Bowl. Gowanus Lounge now reports that the alley will be ready to open as early as this fall...and it will be conveniently located nearby Williamsburg's only other bowling alley!

Housed in an 1880s ironworks foundry at 61 Wythe Avenue, behind Brooklyn Brewery, the space is just two blocks from The Gutter. GL notes that "Shapiro knew The Gutter was in the works when they signed the lease, but felt the two could coexist." Shapiro also upped the ante by including sixteen lanes (in comparison to The Gutter's eight). While he insists that, like Wetlands, he'll be booking more than just jam bands, you can bet those lanes will fill with tumbleweed fast if he tries bringing groups like String Cheese Incident to rock-snob Williamsburg.

As for bowling during the shows, there's no hard and fast rule on that yet, but the alleys will overlook the rest of the venue. Other factoids on the new establishment: The capacity is 600, and there will be a food component, which is hinted at being provided by "a respected restaurant with one foot in Brooklyn already."

Photo of Brooklyn Bowl space on Wythe via Curbed.