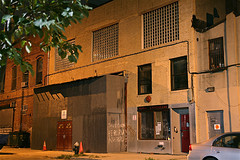 This really is turning out to be the year of the venue -- with more openings, closings, re-brandings, re-namings and articles written about the places we go see music than ever before. Now with the latest Bowery Presents venue (The Music Hall of Williamsburg) opening next week, there's another article in The Times.

The piece starts out describing the complex acoustic design that one might "expect to see in a multimillion-dollar concert hall in Berlin or Los Angeles, not in a rock club in a former mayonnaise plant in Brooklyn." The Brooklyn Eagle recently walked the halls of the Brian Swier-designed venue and gives a verbal tour of the place:

Patrons of the Music Hall will enter the building by first going through the basement, passing through a cellar/bar area before going back up into the main concert area. “This way, we keep a lot of sound from getting out into the neighborhood,” Swier mentioned.

One of the ways Swier expanded the venue, as well as changing the acoustics of the space, was by clearing away some of the original support beams and knocking out much of the flooring above the stage. Now, concertgoers can enjoy their music upstairs (by the upper-level bar) while simultaneously listening to the bands below.

Though what’s left of the upper level is directly above the stage, two side mezzanines allow patrons to walk along the upper-level walls and watch the bands playing below. Swier is keeping the exterior wall’s partially whitewashed façade, maintaining what Swier said was the “industrial aesthetic” of the building.

In other words, as booker John Moore put it: “It’s the Bowery in Brooklyn." You can look forward to it rejuvenating North 6th Street again starting next week, we bet the neighbors are stoked.

The Times article also goes in to the other venue openings that have been written, whispered and shouted about. While we've mentioned most of them here (including Andrew W.K.'s 100 Lafayette space), there's one mentioned that's sure to get Brooklynites attention: "Peter Shapiro, who owned Wetlands, the TriBeCa rock and jam-band club that closed in 2001, is planning next spring to open Brooklyn Bowl, a 20,000-square-foot combination bowling alley and performance space in Williamsburg." The Dude would certainly abide.

Photo of the Music Hall of Williamsburg on August 28th via I'mJustSayin's Flickr.