Rock on the Block 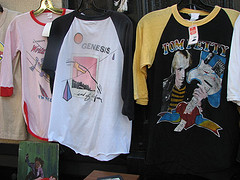 Christie's is finally getting on the overpriced vintage concert t-shirt bandwagon. Today they bring 30 rock tees to the block as part of their Rock and Pop Memorabilia auction, and all are expected to sell for up to $4,500 each. Remember when Stella McCartney was creating overpriced rock tees for Chloe? We sort of blame her for this.

"The fact that these T-shirts exist in such pristine condition is remarkable because most people didn't keep these shirts. They were worn out and thrown out," said Simeon Lipman, a specialist in entertainment memorabilia for Christie's.

A short-sleeved white shirt with green sleeves celebrates John Lennon's foray into holiday music, with the words "War Is Over! If You Want It" — a lyric from his song "Happy Xmas (War Is Over)." Its pre-sale estimate: $2,000.

The shirts were all owned and worn by different folks, one sported by New York Dolls bassist Arthur Kane -- which he wore for one of the band's album cover shots. All of the shirts are featured in Johan Kugelberg's book What Comes Around Goes Around: Vintage Rock T-Shirts, and they all took center stage this morning when they went on display to a large crowd which Lance Bass was reportedly a part of (undoubtedly he was trying to slip a vintage 'N Sync tee into the display).

If you want your own old timey concert tee, head over to Bess on Lafayette for vintage shirts that start at $85 (and go all the way up to $780!).