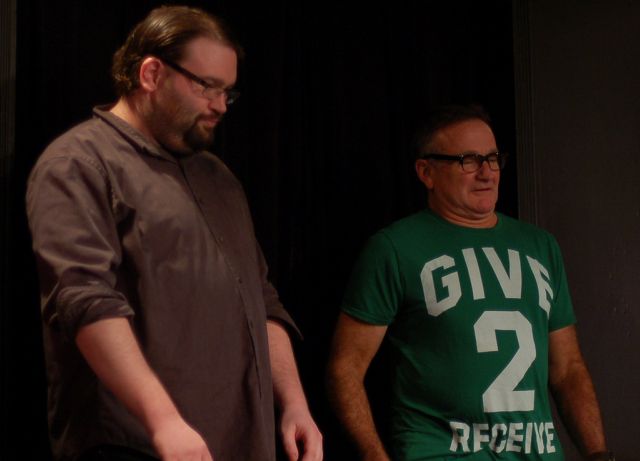 Comedy fans and improv students who packed into the UCB Theater last night expecting to see what Amy Poehler once called "the stars of tomorrow" of house teams performing their weekly improvised sets got a real treat when one of the "stars of yesterday", Robin Williams, made a surprise appearance and performed with the second improv group of the night, Bangs.

Williams has performed at the theater before at the ASSSSCAT 3000 show alongside more high-profile regulars like Poehler and other stars of SNL and 30 Rock who improvise every Sunday. But when he showed up last night at the theater, members of Bangs really had to improvise when they learned just before going on that he wished to join them on stage. The audience ate up what sounds like the sort of wildcard performance you'd expect from Williams and word from the team is that the star was nothing but friendly and gracious to them.

Craig Rowin from Bangs shared an anecdote on his blog about just how bizarre the experience was:

He knows everyone. After the show he was trying to figure out the name of the "other famous Australian actor" -- because he was trying to think of another reference he could have used in a scene where we all played Hugh Jackman. Sean said "Paul Hogan." Robin Williams was like "no a current actor," and I jokingly said "Yahoo Serious," expecting a chuckle from him, instead, he looked down and said "he's a good guy."

UCB Artistic Director Anthony King told us that having Williams there was "exciting for the audience and the performers." We just hope that the Patch Adams star wasn't "gathering material" after returning to stand-up in recent years. And here's a fun fact: King's Saturday night improv team, Reuben Williams, was originally named after Mrs. Doubtfire himself before they began performing at UCB.