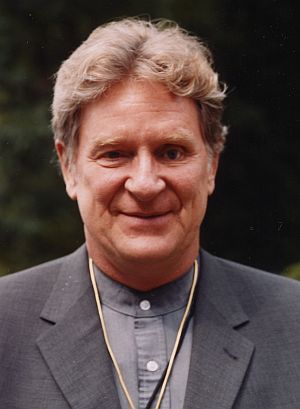 Professor, author and activist Robert Thurman is widely regarded as the leading American expert on Tibetan Buddhism, having been a major force in the widespread introduction of Tibetan culture and religion to the west. In 1962, Thurman became the first American ordained as a Tibetan Buddhist monk, but after a few years he shifted from strict monasticism to the more conventional lifestyle of an academic. Though currently on sabbatical to write another book, Thurman remains a beloved professor in the Religion Department of Columbia University. At the behest of the Dalai Lama, Thurman co-founded Tibet House with composer Philip Glass and others; this year’s annual Carnegie Hall benefit for the organization takes place next Wednesday, February 13th. The lineup thus far includes performances by Glass, Ray Davies, Phamie Gow, Nawang Khechog, Ashley MacIsaac, Marisa Monte, Sufjan Stevens & Tom Verlaine.

So what exactly does Tibet House do on behalf of Tibetans? The Dalai Lama asked us to start Tibet House in the late 1970s to preserve Tibetan culture; there are two other official Tibetan organizations in America, the Campaign for Tibet, which does political advocacy on behalf of Tibet and the Tibet Fund, directs economic assistance to refugees and Tibetans. The job of Tibet House is to introduce Tibetan culture to people through films, publications, etc. and to also raise funds to support Tibetan cultural projects like art departments in schools.

Are these schools primarily located where the refugees are in India? Some, and some in Tibet. We’ve helped medical schools and things in Tibet but because we’re associated with the Dalai Lama we have to keep a very low-profile in Tibet because the Chinese get all agitated if the Dalai Lama has anything to do with anything.

When was the last time you visited Tibet? Two summers ago.

How has it changed in recent years? It’s terrible. It’s so flooded with Chinese immigrants that the Tibetans are crowded out of everything and the environment is suffering badly. It’s quite dramatic; the growth of the Chinese population and the devastation they’re wreaking on the environment. I’ve gone every two years since the eighties; never for a long period of time because I’m non grata with the Chinese for anything more than a tourist visa because of my relationship with the Dalai Lama. I can’t apply for research or something like that so I can only go for a month at a time here and there.

But the speed with which the Chinese have flooded into Tibet is amazing. It intensified hugely around ’92 when the Soviet Union deconstructed, releasing many former possessions of the Soviet empire, like Ukraine and Kazakhstan and so on. And when that happened Deng Xiaoping got very freaked out and decided to redouble efforts to colonize Tibet. I have not been since the train got going. I’ve heard from Tibetan friends and other westerners who’ve visited since then that it has accelerated the flood of Chinese into Tibet. So the Dalai Lama is very unhappy and worried about this.

What is the environmental damage? I was just writing about that when you called actually so the facts and figures are still in my mind. Since the 1950s they’ve cut about 40-50% of Tibet’s forest cover, which was huge. Tibet had one of the two biggest forest areas in China’s possession; they’ve slowed down the cutting lately, at least on paper, because the clear cutting has caused so many bad floods in western China.

The dumping of nuclear waste in certain areas, though not too widespread yet, has been very devastating. And the desertification of the pasture land in eastern Tibet has been very destructive. Tibetans have an original pattern of nomadic grazing where yaks would travel freely over an unfenced land and therefore never overgraze one section. Since the Chinese came, they’ve forced the Tibetan nomads into collective concrete hovels and villages they never used to live in, fenced the land and then overstocked parts of that range with a kind of commercial cattle breeding. That’s created desert and destroyed something like 75% of the grassland in eastern Tibet. This is a huge problem that contributes to global warming and weather disruption in the northern hemisphere.

The Tibetan plateau is a huge area, two and a half-million square miles, bigger than the Louisiana Purchase, and when you turn a huge percentage of that from green grass to sandy rock and desert this creates a reflection of the sun in summer months. I’ve just been looking at meteorological studies done by NASA that reveal how a giant pillar of heat rises to the stratosphere and creates a terrible impediment to the jet stream flow. This disrupts weather patterns in China, the south Pacific and hits southern California.

Do you find it surprising that given China’s human rights record, they were awarded with the Olympics? I wasn’t surprised because it’s part of this constructive engagement with China extending back to Bush senior and Kissinger. It’s based on the idea that this is an exceptional dictatorship and when you’re really nice to them economically they will then become nicer. So the thinking is that if you give them a big P.R. thing to do like the Olympics, they won’t want people to see how they’re beating up the Falun Gong or whatever it is they’re doing lately.

This is a fallacious concept but within that it’s true that the Chinese are trying to clean up their act so they won’t be embarrassed during the Olympics. Unfortunately, what the Chinese consider ‘cleaning up their act’ is to wipe out people who might do human rights protests or something; they don’t mean stopping the human rights violations. They can definitely expect some serious demonstrations from the Falun Gong people, who have been completely tortured. The Tibetan exiles are planning some non-violent protest to try and embarrass the Chinese; no one knows what. The Uighur people in Turkistan are planning something. The Chinese dissidents may be worn out, but they may do something.

The Chinese government has to learn that the acquisition of soft power – respect and goodwill – can’t be attained by crushing people. The big question for our time is whether they will realize that to have a good human rights record you have to actually respect human rights, you can’t just crush people and then make propaganda claiming to respect human rights.

Will Tibet House be doing anything to raise awareness during the Olympics? No, nothing in particular as an institution. As the cultural institution of His Holiness, we have to remain cultural and can’t do overly political things, otherwise we couldn’t get into museums and things because we’d be accused of a political agenda. But individually, I am writing a book about how China should switch to the soft power mode and how Tibet is a perfect opportunity for them to do that.

Do you still practice meditation on a regular basis?
I try but I get a little too busy. I am taking a year sabbatical so I may have more time; I try to get in ten to fifteen minutes a day, yes. But sometimes more than that gets difficult.

Has your ability to meditate improved as you’ve gotten older? Oh, yeah. Either it’s improved or I’ve gotten more mentally tired with old age and my mind just seems calmer. It’s either meditation development or senility; no one knows.

What gives you the most joy these days? Well, my grandchildren and my family and whenever I do manage to meditate a little bit or write about Tibetan poems or translate something. I get joy when I write; I forget about minor issues and just pour myself into my work. And I will get a big joy out of whenever the Chinese decide to calm down and play ball with the Dalai Lama in a genuine way and the Tibetans get a break, since I’ve put so much of my life into that.

Have you seen any progress? Well, as the Dalai Lama likes to say, internally there is progress but externally it’s hard to see any progress. In fact there’s greater danger externally. We all had high hopes in the late 80s with Russia and South Africa and then the Berlin Wall coming down and people seeming turn in the right direction. And then places like North Korea, China, Burma and the Middle East seemed to simply not react in this same favorable way. And then of course we have the current dark Cheneyian front, so America is kind of going in a militaristic way, too. So there is a big negative rebound on the surface of the planetary movement at the moment. But I hope people will have seen how counterproductive that is and we will have now a new renaissance for a more peaceful century; that’s what we have to hope.

Are you endorsing anyone in the New York primary? I would support any of the democratic candidates who win the nomination wholeheartedly but of the two remaining at this point I am definitely preferring Obama. The Clintons bring up so much old baggage, but on the other hand they would be a million times better than McCain or Romney. And I like them actually, if they were the only ones running. But Obama is such a new thing it’s kind of fun. And we’ve lost so much of our reputation internationally in the Bush era that to have a black person as our president would maybe signal something to the world that we have really embraced a new approach, as opposed to this aggressive Cheney “let’s conquer the planet” futile effort. At the moment I am enjoying Obama but I will surely line up behind Hillary if she wins the nomination.