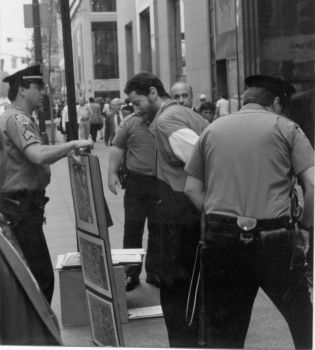 Robert Lederman has been very vocal about the rights of art vendors selling goods in SoHo. He founded A.R.T.I.S.T. (Artists' Response To Illegal State Tactics) in 1993 in order to fight the "legal and political struggle for full First Amendment protection involving the creation, display and sale of art on NYC streets and in Parks." They're currently continuing their battle against the Business Improvement District and council member Alan Gerson, which you can read more about here.

Do you feel both artists who sell their own art, and vendors who sell art that they didn't create should both have a right to sell on the sidewalks? Visual art is protected by freedom of speech. It's just like a book. The author of a book is protected and so is the publisher, bookstore or library that conveys that book to the public. In the same way an art gallery, museum, artist or art vendor are all equally protected. Its' the art, not who sells it, that matters.

What about those who are selling watches, etc? In our lawsuits the Federal Courts described "art" as paintings, photos, sculptures and prints. Since then the city expanded that definition to include DVDs, music CDs etc. A watch might be beautiful, but it is not considered to be protected speech. Non First Amendment protected materials can only be sold by licensed vendors. since winning our lawsuits, artists are exempt from any license or parks permit.

How long have the NYPD and/or BID been hassling the SoHo street vendors? The city of NY started harassing artists when Giuliani became Mayor. He was responding to pressure from the BIDs (Business Improvement Districts) and the SoHo Alliance, a landlord group. The harassment ebbs and flows but it has never stopped since 1994. Right now the main harassment is legislative, Councilmember Gerson's more than 16 unenforceable, unnecessary and unconstitutional vending Intros.

Overall are you in good standing with the neighborhood locals? There are about 1,500 street artists in NY. Most get along very well with local residents. The ARTIST group has always counseled street artists to do their best to be good neighbors. However, our rights are not dependent on approval by residents, landlords or city officials. Freedom of speech protects speakers and messages that are unpopular as well as those which are popular.

What would be your ideal solution to the situation as it is now? The situation as understood by the media and the public is not even remotely close to the reality. The BIDs and the Councilmembers proposing these anti street artist laws who are their puppets, like Alan Gerson, intend to privatize vending. They have no intention to eliminate vendors, just to take the independent vendors out of vending and turn it all over to corporations, exactly as is already the case in NYC parks. They actually plan to increase vending not decrease it. If the public understood what the real agenda is, they would oppose it even more than we street artists do. All that needs to be done is to enforce the existing laws.

Do you feel hopeful about the outcome, and when do you think the outcome will happen? For the past 15 years we street artists have fought for our rights, and won. When we started ARTIST in 1994 few of us thought we could beat Giuliani who had 600 city lawyers and 40,000 police at his disposal. I was arrested more than 40 times in those years and I never lost hope. We have won lawsuit after lawsuit. We also stopped many previous legislative efforts to pass laws to destroy our rights. If we lose, every single New Yorker will have lost their full First Amendment rights on public property along with us. I am hopeful that one way or another, we will prevail.

Please share your strangest "only in New York" story. I'll give you my most recent. The morning of the hearing on vending I went very early to City Hall to reserve the steps for our protest. The police who ran security said it was too late, that things have changed and now you have to reserve the steps days or weeks in advance. We began to argue. It was getting ugly. Just then the Mayor walked out. We shook hands and he asked the police, "Are you taking care of this guy?" After the Mayor and I spoke for a few minutes he left and the officer signed me right up for the stairs. It was a very lucky coincidence.

Which New Yorker do you most admire? The Statue of Liberty.

Given the opportunity, how would you change New York? Get rid of the BIDs. They are an unelected shadow government that is privatizing all public space, all parks, privatizing courts even the NYPD. Most people don't have a clue what is going on and the media, which is closely aligned with the BIDs, is keeping them in the dark.

Under what circumstance have you thought about leaving New York? I like to get out in the country and visit the Catskills frequently but I doubt I'll ever completely leave NY. I grew up here and there is no place else quite like it.

Do you have a favorite New York celebrity sighting or encounter? One thing about being a NYC street artist is that you eventually meet everybody. Over the years I've met hundreds of celebrities including many of the movie stars, artists and singers I've most admired.

Best cheap eat in the city. There's tiny restaurant in Chinatown called Yan Yan. They have a dish called sam bo fan that I love and it's only about $3.

#artist
#interview
#robert lederman
Do you know the scoop? Send us a Tip