Martin Scorsese's long-awaited gangster epic The Irishman, which reunites him with longtime collaborators Robert De Niro and Joe Pesci (his first film in almost a decade!), is one of the must-see films of the fall. It'll open the New York Film Festival in September, have a theatrical run, then be on Netflix as soon as November. Below, you can watch the first trailer for the film, which includes some glimpses of the de-aging technology used on leads De Niro, Pesci and Scorsese first-timer Al Pacino so that they can play their characters at different ages throughout the film.

Here's the logline for the film: "Robert De Niro, Al Pacino and Joe Pesci star in Martin Scorsese’s THE IRISHMAN, an epic saga of organized crime in post-war America told through the eyes of World War II veteran Frank Sheeran, a hustler and hitman who worked alongside some of the most notorious figures of the 20th Century. Spanning decades, the film chronicles one of the greatest unsolved mysteries in American history, the disappearance of legendary union boss Jimmy Hoffa, and offers a monumental journey through the hidden corridors of organized crime: its inner workings, rivalries and connections to mainstream politics."

The film is based on Charles Brandt’s nonfiction book I Heard You Paint Houses, with Pesci as Pennsylvania mob boss Russell Bufalino, Pacino as Teamsters president Jimmy Hoffa, and De Niro as Sheeran. 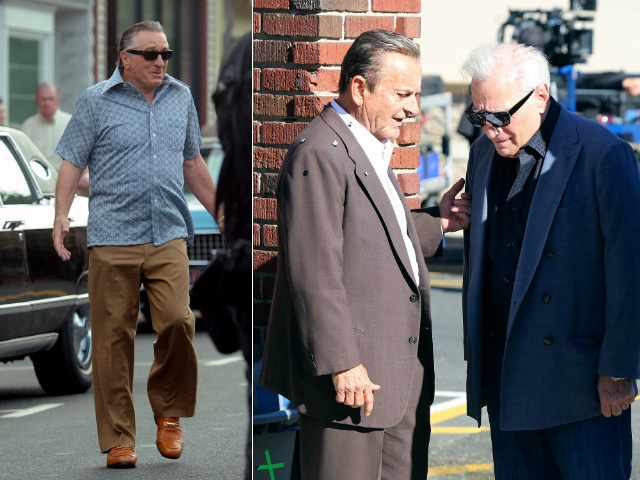 The supporting cast is just as illustrious as those top three: it includes Harvey Keitel, Ray Romano, Anna Paquin, Jesse Plemons, Uncle Junior, Bo Dietl (?), and literally 400 other credited actors (I counted it! That's a huge cast!). This is Scorsese's first film with De Niro and Pesci since 1995's Casino, and Scorsese's first non-documentary film since Silence (he released Rolling Thunder Revue: A Bob Dylan Story by Martin Scorsese earlier this summer).

Scorsese has previously spoken about the difficulties of using the de-aging technology and his insistence on realism: "Why I’m concerned, we’re all concerned is that we’re so used to watching them as the older faces," Scorsese said during a podcast appearance earlier this year. "When we put them all together, it cuts back and forth….Now, it’s real. Now, I’m seeing it. Now, certain shots need more work on the eyes, need more work on why these exactly the same eyes from the plate shot, but the wrinkles and things have changed. Does it change the eyes at all? If that’s the case, what was in the eyes that I liked? Was it intensity? Was it gravitas? Was it threat?"

#al pacino
#joe pesci
#martin scorsese
#movies
#netflix
#robert de niro
#the irishman
Do you know the scoop? Comment below or Send us a Tip