Zelda, the beloved wild turkey that has lived in Battery Park for over a decade, has died after being hit by a car near Pier 11. Named after Zelda Fitzgerald, who was allegedly found in the park after one of her nervous breakdowns, Zelda was a strong bird who even survived Hurricane Sandy.

Zelda the turkey has been in the park since 2003, and it's "presumed that she entered Manhattan's north end from the Bronx and then journeyed south (downtown), as during spring 2003 there were several turkey sightings in Manhattan at points progressively further south, all prior to Zelda's taking up residence in the park." 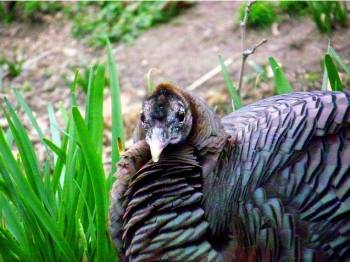 The Battery Conservancy, via Curbed, has released the following statement:

"Zelda made her first appearance on May 5, 2003 when garden designer, Piet Oudolf and 50 volunteers planted the Gardens of Remembrance along the waterfront in honor of all the survivors of 9/11 who had fled to safety through the park.

Zelda became a beloved member of The Battery Conservancy team, taking care to make an appearance at every Conservancy event. Since the first Battery Gardeners' Luncheon in 2003 and her first Battery Gala in 2004, Zelda was seen and photographed mingling among the guests before returning to her favorite trees to roost and watch the lively movement of the park's visitors.

Zelda's last appearances were at the 11th annual Battery Gardeners Luncheon, on September 17th, making sure to greet guests as they arrived, and at the previous day's Conservancy board meeting, where she monitored the discussions of the park's future from a nearby tree."

#battery park
#death
#RIP
#zelda
Do you know the scoop? Comment below or Send us a Tip