Sunny Balzano, beloved Red Hook bar owner, artist, and patron saint of magnanimous misfits, died on Thursday at Methodist Hospital in Park Slope. He was 81. A friend said he suffered a cerebral hemorrhage on Wednesday, slipped into a coma, and was taken off of life support yesterday, surrounded by loved ones and family.

Balzano's bar, known simply as Sunny's, operated illegally as a speakeasy when it became a hotspot in the 1990s and early aughts, drawing patrons from beyond its isolated corner of Red Hook largely through word-of-mouth. Located near the end of what was then a desolate cobblestone street, Sunny's was known to cast a powerful spell over first-time visitors, many of whom felt transported back in time, or out of time, as they escaped the abrasive city into a colorfully-lit honky tonk that appeared, Brigadoon-like, every Friday night. The sorcerer who conjured the spell (then handed out wands to everyone) was Balzano, an ecstatic Taoist jester with long curly hair who often welcomed guests with a disarming embrace, leading many to assume he was a dear old friend they'd inexplicably forgotten while passing from one dream to the next.

The bar had been in the Balzano family throughout the 20th century, serving grub and booze to longshoremen back when Red Hook was bustling with stevedores. In the 1970s, most of the shipping industry had shifted to New Jersey. Other bars like the Balzanos' closed up shop, but their place lingered, kept on life-support by Sunny's uncle John as a sleepy sort of old man bar, open only during the day.

The typical tough-guy attitude associated with working class Italian-Americans never manifested itself in Sunny, but he was old-school Brooklyn to the bone. A gritty toughness at his core anchored his more forward-facing attributes of joy and frivolity. He was famous for his seemingly endless supply of fascinating and often hilariously shocking stories, ranging from his early days in a much different Red Hook to his travels around the world, all told in his inimitable idiom. Balzano's distinctive vocal style—old school Brooklyn aged in oak casks scavenged from a British shipwreck—had a way of seeping into your own talk as the drinks piled up; at some point you might hear yourself asking the bartender if he would "do you a kindness," as Sunny would put it, and call you a cab.

After his uncle died in the early '90s, Sunny took over completely, filling the bar with his abstract paintings and attracting the artists and other newcomers who'd coalesced in Red Hook for the cheap rents, stunning light and idiosyncratic charm. The bar's liquor licenses had lapsed, but Red Hook still had an outlaw spirit in those pre-Fairway days. As late as the year 2000 I still saw packs of wild dogs roaming the streets.

Sunny's stuck to a religious Friday regularity, and as time passed, more and more people made the pilgrimage at week's end, taking the F train to Smith-9th Street and piling into cabs to Conover Street, where everyone who stumbled into Sunny's seemed to agree they'd lucked into a vortex of phenomenal magic and merriment.

The official name, optimistically intended to skirt liquor laws, was The Red Hook Yacht and Kayak Club. On most Fridays you'd arrive to find a leathery old man named Tony playing Johnny Cash on a guitar by the front door, or the greasy Gowanus Canal Boys honky tonk jug band would have the room bouncing. The bar was typically rollicking by midnight, with people congregating outside to smoke and various groups venturing drunkenly out onto a rock jetty to reach for the Statue of Liberty, among other things. The revelry was fueled by the $3 dollar drinks—a uniform price no matter what you ordered—and you'd keep track of how many you'd consumed by making a mark on the back of a small chit with an old nautical illustration on it.

It was a raucous circus, and Sunny was the exultant ringleader, a raconteur and lover of life like no other. If you brought your old pair of tap shoes one Friday as a gift for Sunny, it was a safe bet he'd be tap-dancing on top of the bar by last call.

In his well-received new book about Sunny and his saloon, author and former Sunny's bartender Tim Sultan writes:

Sunny was not in the least proprietary, at least not overtly. If a person expressed admiration or fidelity to his bar, he would say, "My bar? This isn't my bar any more than it's anyone else's bar. It don't belong to me. It belongs to each of you who have come here and have served to make it what it is that it is. It's our bar, aye?' He appeared to mean this in the most sincere way. It was an outlook that emboldened customers to make whatever contribution to the humanities they wished.

As someone who once contributed to the humanities by standing silently in Sunny's bar wearing a silver unitard, I can confirm that as fact. Sunny Balzano was one of the most kind, generous, funny, charismatic, and loving people I've had the incredibly good fortune to meet, a unique individual who created magical moments with his mere presence, in large part because of his ability to see the light and magic in others, and coax it to the forefront. He will be greatly missed, and never replaced. 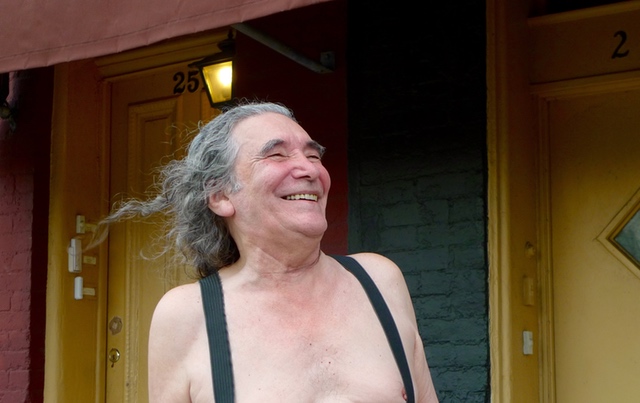 Sunny outside his bar and home. (Courtesy Tim Sultan)

#brooklyn
#red hook
#sunny balzano
#sunny's
#sunny's bar
#original
Do you know the scoop? Comment below or Send us a Tip