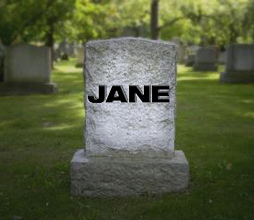 We're not that in to girlie glossies, but after Sassy folded we went straight for Jane magazine (both were run by Jane Pratt). Now the latest will meet the same fate as the former, it was announced today that the magazine has folded. Mediabistro has the memo that went out from Charles H. Townsend (President & CEO of Condé Nast Publications), which stated the August issue would be the last and also:

"This was a very difficult decision for us. We worked diligently to make Jane a success. However, we have come to believe that the magazine and website will not fulfill our long-term business expectations."

Pratt left the helm in 2005 (though it's unclear if that was her decision or someone else's). Everyone is a buzz about the news today, Wikipedia has already been updated, the message boards are filling up and questions raised - such as one about a future reality show featuring Jane staffers:

The shutdown also puts a fat question mark over The Fashionista Diaries, the new reality show being filmed this summer for SoapNet. The series follows fashion industry interns, two of whom were working at Jane. Shooting had been scheduled to continue through the summer, culminating at New York Fashion Week. An employee of the production company, Go Go Luckey Productions, hadn't heard about the closure.

As for those Jane staffers and others, they have been told they're to be out of the office by the end of the day. And as for former staffer Pratt, this week she'll do her Jane Radio show live on Sirius tomorrow at 1pm EST. Call in and get the scoop!