Ringling Bros. Circus To Phase Out Elephants By 2018 As claims of animal cruelty have grown, the company that operates the Ringling Bros. and Barnum & Bailey Circus has decided to stop using elephants in their circus shows by 2018. Alana Feld, of Feld Entertainment, told the AP, "There's been somewhat of a mood shift among our consumers. A lot of people aren't comfortable with us touring with our elephants." 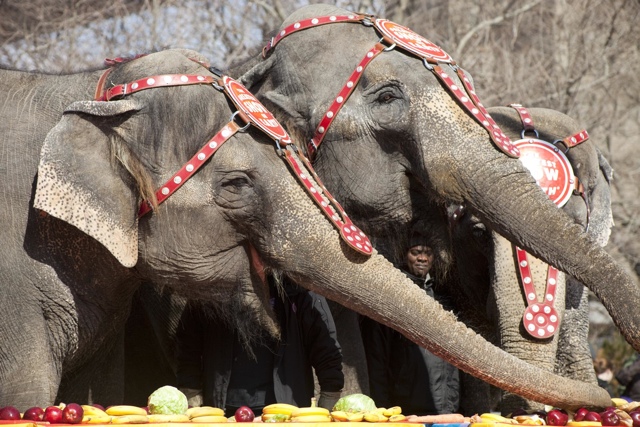 Feld Entertainment gave the exclusive to the AP, which reports:

Feld owns 43 elephants, and 29 of the giant animals live at the company's 200-acre Center for Elephant Conservation in central Florida. Thirteen animals will continue to tour with the circus before retiring to the center by 2018. One elephant is on a breeding loan to the Fort Worth Zoo.

Another reason for the decision, company President Kenneth Feld said, was that certain cities and counties have passed "anti-circus" and "anti-elephant" ordinances. The company's three shows visit 115 cities throughout the year, and Feld said it's expensive to fight legislation in each jurisdiction. It's also difficult to plan tours amid constantly changing regulations, he said.

"All of the resources used to fight these things can be put towards the elephants," Feld said during an interview at the Center for Elephant Conservation. "We're not reacting to our critics; we're creating the greatest resource for the preservation of the Asian elephant."

In 2014, Feld Entertainment VP Stephen Payne said of a NYC protest against elephants being used in the circus, "This is another attempt by an organization with a radical animal rights political agenda to tell people not just in New York but everywhere what they can and cannot see."

And this news does not make PETA happy. In a statement, the animal advocacy group said:

For 35 years PETA has protested Ringling Bros.’ cruelty to elephants. PETA also caught Ringling’s abuse on video and released photos of its violent baby elephant training to the world. We know extreme abuse to these majestic animals occurs every single day, so if Ringling is really telling the truth about ending this horror, it will be a day to pop the champagne corks, and rejoice.

However, many of the elephants are painfully arthritic, and many have tuberculosis, so their retirement day needs to come now. Three years is too long for a mother elephant separated from her calf, too long for a baby elephant beaten with the sharp fireplace-poker like weapon called bullhook that Ringling handers use routinely, too long for an animal who roams up to 30 miles a day in the wild to be kept in shackles

When Ringling Bros. brought the circus to Brooklyn in 2013, we noticed the bullhook used to keep the elephants under control. 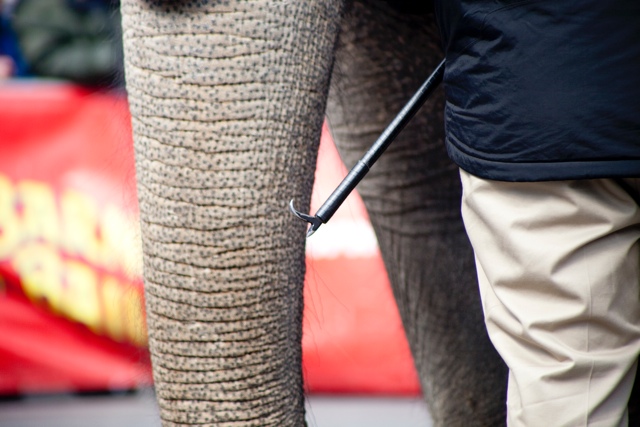 Feld Entertainment tells the AP that it "costs about $65,000 yearly to care for each elephant, and Kenneth Feld said the company would have to build new structures to house the retiring elephants at the center, located in between Orlando and Tampa on a rural, ranchlike property." And while the circus is adding more "motorsports, daredevils and feats of humans' physical capabilities," there will still be other animals: "this year it added a Mongolian troupe of camel stunt riders to its Circus Xtreme show."

#animal cruelty
#circus
#elephants
#Feld entertainment
#peta
#ringling bros
Do you know the scoop? Comment below or Send us a Tip