Ridgewood Locals React To Times Report On Its Brooklynization

This week the New York Times, breezing right by Jefftown, printed another article about Ridgewood, Queens: The Next New Bushwickburg, in the Quooklyn District, just before the Cemetery Belt.

One of their first articles declaring this Brooklyn bordertown as up-and-coming was in 1983, when the paper spoke to community leader Paul Kerzer, "whose Ridgewood family tree begins with his Bavarian- born great-grandparents." He told them that he had dreams of sidewalk cafes, and that they'd like "to open the doors and bring in new families with new names, new ways and new money."

This week's article ran in the Style section, and this time the Gray Lady is outright calling it—it being the Brooklynification of Queens. Sarah Feldman, who has lived in the neighborhood for like, two years, posted an outraged "how dare you!" open letter on Facebook, saying they "butchered our neighborhood with texts that scream privilege." What? EVERYONE FREAK OUT:

Ridgewood Twitter is FREAKING OUT about the Thursday Styles article about Ridgewood. (Me included, apparently.)

We asked some other Older Gentrifiers what their thoughts were on the article, and the Newer Gentrifiers it may help attract to the neighborhood—here's what they told us: 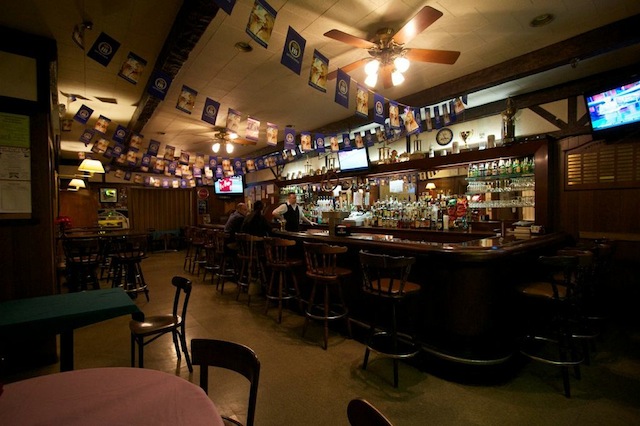 "It seems like the Times has a recent history of talking about Ridgewood specifically in their Style section, where the quotes by and large come from people new to the neighborhood, either living there or opening businesses. This article should come as no surprise really, the demographic for the Times' readership is upwardly mobile and the Gray Lady is desperate for relevance. It's like they picked and chose from a list of key phrases that would generate more page views: 'Guy Fieri,' 'Park Slope,' 'Batali-esque ponytail,' 'vegan muffins,' 'tote bags,' etc. The continued use of 'Quooklyn' is just icing on the cake.

"Whereas the Times has brought up Ridgewood as the 'next big thing' multiple times over the decades it used to be discussed in the real estate section.

"What people tend to forget in talking about the neighborhood is that not only is a large section of it marked as a historic district with the city, but that it also has a high owner occupancy rate and many of the yellow stones are owned by families that have been there for generations. So while it might be easy for someone new to the area to say 'Creative people love to be the ones to explore new territory,' it's easier for their neighbors to shake their head and smile at the audacity of such a statement." — Eric Nelson, writer, 5 year resident of Ridgewood

"There have been a million articles about Ridgewood in the past year, but on the ground it's been a very slow trickle. The Bushwick refugee presence certainly has ticked up, but they remain just a tiny minority. My block is still all 99-cent stores, barber shops, and bodegas. No wine bars or farm-to-table restaurants to speak of... although allegedly they're coming.

"I love the term Quooklyn because it is so stupid looking and sounding that it perfectly captures the essence of the real estate hype machine. I feel like the NY Times is doing some Trading Places-esque social experiment where if they write enough articles about Ridgewood being the Next Big Thing, then it'll become it, and Maureen Dowd wins $1 or something." — Alex Tween, 6 year resident of Ridgewood

"As someone who grew up in NYC, I've lived in the Ridgewood area for about six years now. At first, I was totally in love with my immediate neighborhood. It was a nice working class area, with residents from all backgrounds that greeted each other with a friendly, down to earth mentality. Now thanks to all those crappy real estate articles, that's all gone.

"With all this talk about how Ridgewood is supposed to be the next 'up and coming area' or whatever, people have been acting hostile towards each other. We are all stressed out about not being being to afford the ever increasing rent hikes. Some long time residents are slowly being pushed out.

"Sometimes neighborhood familiarity does bring comfort at the end of the day, but now those comforts are slowly developing into a luxury. Usually change is good, but not at the expense of others who are just trying to make a living. Yes, I'm fully aware that Ridgewood was a part of Brooklyn at one time. Yet this whole 'Quooklyn' is not only ridiculous but insulting. Long time residents and even recent transplants are fully aware of what's being written about Ridgewood. It's very annoying to read what some real estate carpetbaggers have to write about where you live. Meanwhile, the result is now having my landlord turn on me on a dime, pardon the pun.

"Then again, if anyone wants to be overcharged with rents while dealing with slow M train service and zero parking space, be my guest." — Michele Witchipoo 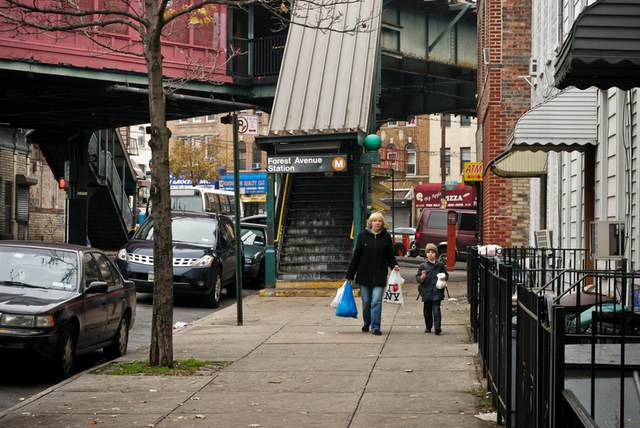 "Having lived in the neighborhood for over six years, and my brothers for years before that, i have watched the recent changes with enhanced interest. While parts of the recent articles about Ridgewood are accurate, I find that there is this misconception that the it's 'out of the way' or 'distant' when it is 20 minutes to Union Square/LES and 40 minutes to midtown/FiDi.

"I also think that the fears of gentrification are overblown. Ridgewood is a neighborhood of ethnic enclaves and 1-6 family homes, many owner-occupied, which will keep out many of the real estate speculators that tend to accelerate gentrification. So it is not accurate to compare Ridgewood to the past and current booms in Williamsburg and Bushwick." — James Walsh 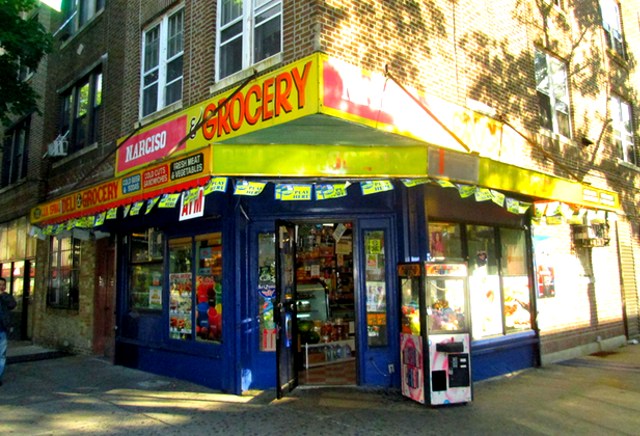 And finally, from Angely Mercado, a born-and-bred native of Ridgewood:

"As for Ridgewood as the next big thing... I'm a little conflicted about that since I've been here all my life and I've seen how some of the changes have progressed. I like some of the changes—a bit more safety, more art, and a few more restaurants/bakeries to choose from (Cream and Norma's). The other week there was a crew filming near the Seneca train station of the M and that was pretty interesting.

"Some of the people moving in so far have been pretty nice, just wish some of the newcomers near me would engage more with longtime residents. Then again more longtime residents could reach out as well. But I really fear the development that could become overdevelopment, and the displacement it might cause." 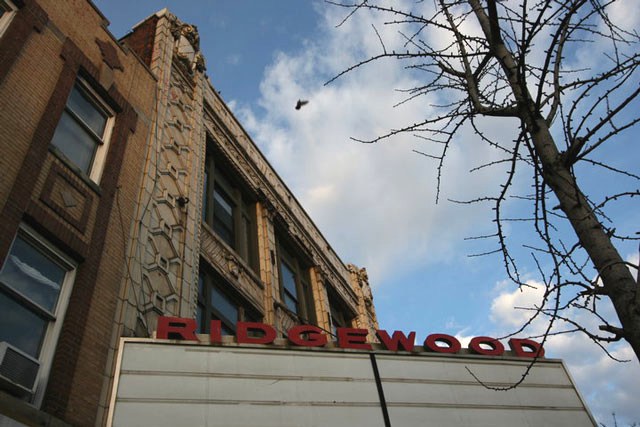 (Photo via Friends of the Ridgewood Theater)

"One aspect that made it very real for me was the Ridgewood Theater. I saw my first movie there, and now it's going to turn into housing. Whenever I see more housing and development mentioned in conjunction to the area, my first concern is the constant rise in rent is affecting the longtime residents and businesses. And some of the new housing might become luxury housing, and I often wonder if a lot of people are stressed about renting an apartment for $1,500 to $1,600 a month, what are they going to be paying once there are more condos near them?

"I hope that some of the changes stay true to what makes Ridgewood great. Some of those things are the diversity, the hardworking and quirky people, the longtime local events and how much fun everyone has together regardless of whether there are 'trendy' places or not. The area still feels very much like NYC.

I like that the guy who took my awkward baby pictures is still on Myrtle Ave, and that though he's Burmese, he speaks to my dad in fluent Spanish. And I like that it's a little safer to walk around or go jogging at night. It's awesome that I can be buddies with two of the bodegeros near me. I loved playing in the hydrants, the piragua carts, and summer block parties where you find out that your parents' friend from down the block actually plays in a salsa and merengue band because he's performing for everyone. I enjoy some of the changes and I think can find ways to benefit from them, but I want the area to remain a community. It would be heartbreaking to see that dissolve."

#ny times
#queens
#quooklyn
#ridgewood
#original
Do you know the scoop? Comment below or Send us a Tip