After ten years and $16 million, the dazzling new SeaGlass Carousel opened for a media preview today, ahead of its official first day tomorrow, in the Battery. Featuring 30 different sea creatures that glow, rotate and rise up and down, the new attraction sits on the site of the original New York Aquarium. The Battery Conservancy president Warrie Price called it a "completely unique" experience that's "a major step forward in plans to revitalize The Battery."

Stage designer George Tsypin was the mastermind behind creating the carousel's fish and while he's had experience designing for the Opening Ceremony of the 2014 Sochi Olympics and Broadway (The Little Mermaid and Spiderman: Turn Off The Dark), this was a challenge. Tsypin pointed out, "You can't ride a shark like a horse," and eventually settled on creating capsules that allowed visitors to "become the fish"—sort of like a submarine with "portholes you can observe through." 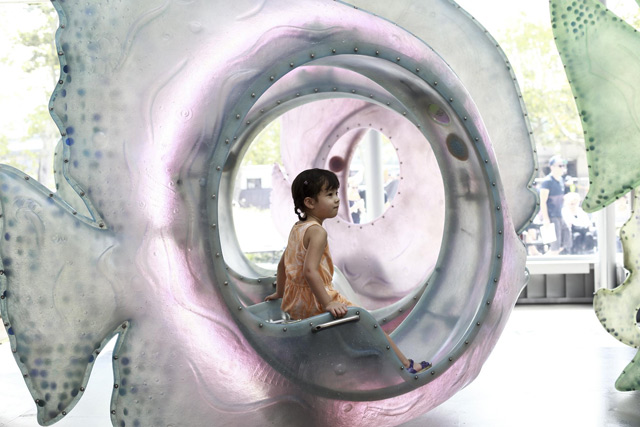 The fish, which can be as big as 9 1/2 feet wife by 13 1/2 feet tall, are made of fiberglass and steel, and glow from within to mimic the bioluminescence of marine life. The glowing, Tsypin said, was "very important" because it helps create the illusion that riders are in the sea.

The drama of the glowing fish is heightened by the fact that each one rotates—and then rotates again on a small turntable, one of three that sit atop a main large turntable. Each fish also has three stereo speakers and a base speaker, all the better to hear the music, all classical selections composed specially for the ride that also have aquatic cues like gurgling water.

And it truly is a magical carousel ride like no other.

The fish reside within a "nautilus-shaped shell" designed by WXY Architecture + Urban Design, nestled in the new Tiffany & Co. Foundation Woodland Gardens. The total project was funded by $8 million in public money and $8 million in private money raised by The Battery.

Price pointed out, "Most NYC children won't scuba dive or snorkel, so here's an opportunity for them to experience that."

The three-minute ride is $5, which likely makes it the most expensive carousel in the city—the Central Park Carousel, Bryant Park Carousel and Coney Island's B&B Carousel are all $3, while Jane's Carousel in DUMBO is $2. Then again, those carousels just have horses go around and around.

Also, children must be 42" to ride unaccompanied by an adult. It's actually pretty high up (this 5'6" adult had to really hike her legs up). Riders are also restrained with a special seatbelt which can only be unlocked by a SeaGlass Carousel worker.

SeaGlass Carousel opens to the public tomorrow, Thursday, August 20, and will be open from 1 p.m. until midnight. After Thursday, SeaGlass will be open 10 a.m. through 10 p.m.

#carousel
#Seaglass Carousel
#The Battery
#original
Do you know the scoop? Comment below or Send us a Tip