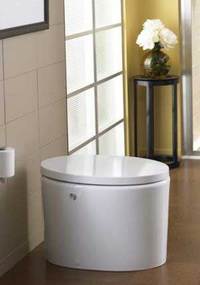 Ricky Kenig, owner of Ricky's (you've probably bought a Halloween costume there before), is leaving his Brooklyn home at 409 Eighth Street. Just last fall it was reported that he'd be expanding his chain to the neighborhood after purchasing a $1.3 million home there; he was said to be "enamored" with the borough.

Now, less than a year later, the 19-foot-wide town house (circa 1899) has undergone a $1 million facelift and will be back on the market for around $3 million. Kenig, a father of three daughters, says he doesn't need all that space.

The Observer reports that his renovations were painstakingly detailed due to his obsessive personality. The home now includes a three-story magnetized wall, a grass patterned heated bathroom floor, four Kohler Purist Hatbox toilets, a video monitor system and a perfectly placed Philippe Starck shower...maybe (Kenig took a hammer to it when “it was off by an inch. It was a f*cking inch! And I couldn’t handle it.”).

Photos of the home can be seen in this NY Times Home article (or early teaser listing?) from last October. We bet he's taking all those Hatbox toilets (pictured) with him though.