Revisiting Carrie's Questions And Columns From Sex And The City 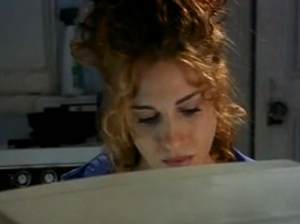 Fifteen years ago today—on June 7th, 1998—the world met Carrie Bradshaw, a fictional New Yorker living in a fictional rent-controlled Manhattan apartment and writing a fictional newspaper column. Throughout the series, viewers were doled out advice through that column, which Carrie would type on her computer while staring out her window on to the most perfectly adorable New York City street, cigarette in hand. Today, we re-watched the first episode and transcribed her first column for you—you're welcome, happy Sex And The City Bday! This column is centered around a woman who was under the impression that New York City men aren't jerks. Fade in:

"Then I realized, no one had told her about the end of love in Manhattan. Welcome to the age of uninnocence. No one has Breakfast at Tiffany's, and no one has Affairs to Remember. Instead, we have breakfast at 7 a.m., and affairs we try to forget as quickly as possible. Self protection and closing the deal are paramount. Cupid has flown the co-op. How the hell did we get ourselves into this mess? There are thousands, maybe tens of thousands of women like this in the city. We all know them, and we all agree they're great. They travel, they pay taxes, they'll spend $400 on a pair of Manolo strappy sandals... and they're alone."

Are you groaning yet? Carrie also asked a lot of questions herself, through her column and her many, many inner monologues—here are some centered around New York City:

Below, watch the first vignette from the first episode. And if you're still wondering if you can move to New York City and live a Carrie Bradshaw lifestyle, the answer is still no.

#carrie bradshaw
#satc
#sex and the city
#tv
#original
Do you know the scoop? Comment below or Send us a Tip