Review: Gnarly Into The Woods Still Enchants In Central Park

Oh, those moments in the woods! Though it takes a few spills along the way, the Public's new production of Stephen Sondheim and James Lapine's fairy tale Into The Woods, which opened at the Delacorte Theater last night, is a big, overly ambitious, lush, dark and ultimately entertaining night of theater. Like most Shakespeare in the Park productions it is still finding its way through the woods in places—but where better to find one's way than Central Park in August?

When first heard, the plot of Into The Woods seems mysterious, but when explained it is nothing serious: A number of traditional fairy tale characters and one original pair go into the woods to get their wishes in the show's easier to digest first act and then, in the second, they learn that, for better or worse, wishes come true, not free.

Cinderella, Little Red Riding Hood, Jack (of the beanstalk fame) join Lapine and Sondheim's original creations (the childless Baker and his Wife) to make up the heart of Woods cast, but they are hardly alone: The musical is filled with characters familiar to any child, including a Witch, a Wolf, princes, giants (truly), a mysterious man, a giving tree and Rapunzel. Not to mention Sleeping Beauty, Snow White, the Three Little Pigs (which moved in during the 2002 revival) and now Hansel and Gretel. Oh, and a narrator.

"Woods" has always been told by a narrator—traditionally an older actor who also plays the Mysterious Man—so you can't really talk about director Timothy Sheader and co-director Liam Steel's version without talking about their decision to make the narrator a child. Now, using a framing device familiar to anyone who saw the film of Where The Wild Things Are, they tell their story directly through his eyes and imagination—a conceit that works (or doesn't) depending on how many precocious children you know*. 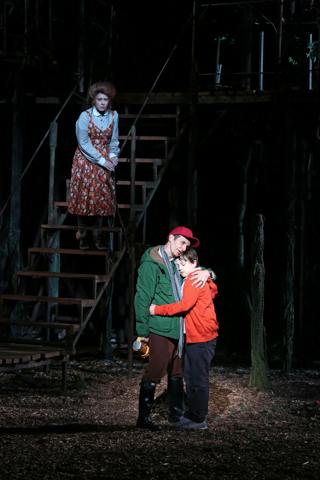 The narrator's framing device—which is introduced in a ham-fisted manner with a cliche, pre-recorded parent-child fight—gives the morals of the second act ("No one is alone," "Children will listen," running away is easier said than done, to name a few) an extra narrative thrust and makes the grief-counseling aspect of the work more explicit. The theme is now summed up (a bit too tidily) by Donna Murphy's Witch, a literally dreaded Borg-earth creature when we first meet her (see the photo below), in a version of the finale that doesn't appear in Sondheim's second volume of collected lyrics, Look I Made A Hat:

How can you say
it will be alright
when you know that it mighn't be true?
What do you do?

What do you leave
to your child when you're dead?
Only whatever you put in its head
things that your father and mother had said
which were left to them, too.

Not easy questions, but the show does try to offer guidance in how to answer them. Yes, parents "of course you were meant to have children." And yes, the struggle for children is worth it for the Baker (Denis O'Hare), his Wife (Amy Adams) and all of us. Children are wishes, after all. Just be careful—children really do listen.

Physically the show is gorgeous. John Lee Beatty and Soutra Gilmour have built a mesmerizing three-story treehouse set that blends into the Park and dominates the show. Nearly every inch of it is used, sometimes in ways you truly are not expecting (let's just say there are giants in the sky, mmkay?). The cast is constantly climbing and marching and hopping and twisting through it—which is great unless you are sitting in a seat near the top of the theater, in which case some significant scenes are blocked by low-hanging speakers (hey Public? Maybe don't give out seat L-X-710!).

On the costume front, Emily Rebholz has created an interesting interpretation of fairy tale fashion fractured through the mind of a child and they work nicely for the most part, though the designs over-reach at points (Red, now a skater, has seen her cape become a jacket and a helmet). The less said about Leah Loukas's wigs, however, the better. If this show ever transfers to Broadway, here's hoping the thing on Amy Adams's head stay in the park. 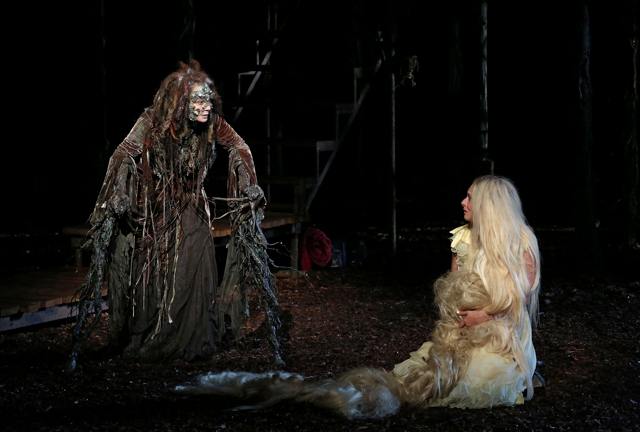 The cast, however, is game. Because the set and framing story are so dominating, the result is a version of "Woods" that somehow feels even more ensemble-based than either of its previous Broadway incarnations. Chip Zien, who played the Baker in the original Broadway production, returns to play the Mysterious Man as a street drunk and is exceptional, managing to turn popping open a beer into the show's best running gag; Donna Murphy offers a slower, if no less terrifying, version of the Witch than New York audiences have seen and knocks "The Last Midnight" out of the park; O'Hare and Adams, rather than being Hollywood divas, give understated and generous performances (and actually both of them, but Adams in particular, could go a little bigger), Jessie Mueller's Cinderella is a lovely, frumpy young woman, Sarah Stiles's take on Little Red, while a little too much at the start (she's now got a sex scene?), comes around and gives a strong, funny performance, and Gideon Glick's Jack offers a sweet, geeky portrait of adolescence. Meanwhile the two children who now play the narrator (Noah Radcliffe and Jack Broderick) both offer solidly distinct takes on the role on alternating nights.

The biggest problem facing this "Woods" is that, because some of the ensemble apparently simply can't handle the Sondheim score, much of the show's music is now sung less and spoken more—which doesn't help sell its many wonderful tunes to those who just don't like Sondheim's music (we've got one right here in Gothamist HQ). Still, to quote Jack's mother (Kristine Zbornik, being a little too cold) "that's okay, too." There is still lots of magic in this bean.

*Having been a precocious four-year-old when we saw the original Broadway production it worked like gangbusters for us, but your mileage may vary.

#into the woods
#opinionist
#public theater
#review
#shakespeare in the park
#original
Do you know the scoop? Comment below or Send us a Tip