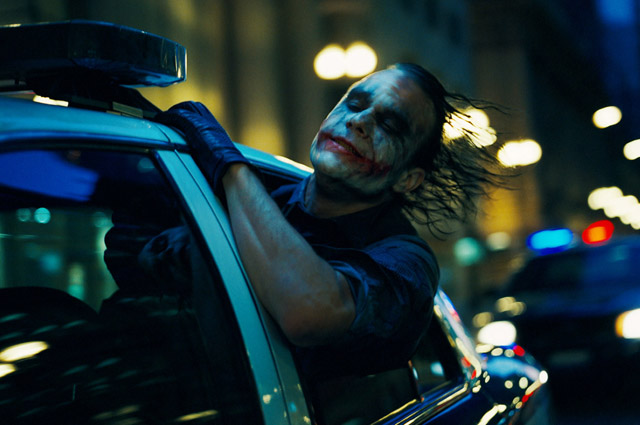 At a press/industry screening of The Dark Knight at the Lincoln Square IMAX last night, the line was already halfway down 68th Street an hour before showtime – and these are the overprivileged industry slobs. It’s going to be pandemonium Friday once the rabid fanboys take over. But you already knew that; the question of the hour is, “Does it live up to the hype?” Well, considering that the anticipation level rivals that of Evangelical zealots craving the second coming, or geeks clamoring for the iPhone 3G, it’s no small achievement that The Dark Knight does – periodically – manage to meet our insane expectations.

Even viewed in all its IMAX glory, there’s no escaping the fact that the storyline is, in broad strokes, that of a rather formulaic superhero action flick. A maniac brings a depraved city to its knees, all hope is lost, the hero risks becoming the villain to save the day, etc. Director Christopher Nolan executes it all with a style that’s at turns visually breathtaking and regrettably murky, but there are still a few great surprises, and the mood is deliciously macabre, thanks in no small part to Hans Zimmer and James Newton Howard’s phenomenally tense score, which often relies on just a few strings slowly ascending the scale like tarantulas crawling up the back of your neck.

Everything’s fine and good – a somewhat ponderous but solid B plus – until Mr. Heath Ledger enters the frame. It's true; he’s astonishing as Joker, hunched over and shambling, with a distressingly high voice that’s recorded in such a way that it sounds as if the microphone’s in his mouth. Ledger’s work here would still have stood out as spellbinding were he alive, but his untimely death changes the equation. It’s impossible to watch his riveting performance here without feeling some degree of sadness, which actually ends up working in The Dark Knight’s favor by investing the film’s fantastical milieu with a much-needed human element. When it's Ledger's movie, he carries it beyond the hype into something extraordinary.

#batman
#critics
#heath ledger
#imax
#movie
#review
#the dark knight
Do you know the scoop? Comment below or Send us a Tip