Review: Bruce Springsteen Invites You Into His Memories At Intimate Broadway Residency "I have never held an honest job in my entire life. I've never worked 9 to 5. I've never done any hard labor. And yet this is all that I've written about. I have become wildly and absurdly successful writing about something of which I personally have had no practical experience." Bruce Springsteen admitted all of this to the small audience eagerly packed into the Walter Kerr Theatre, where he'll be performing almost every night until February.

Springsteen on Broadway officially opened this week, and if you're expecting a jubilant affair similar to the high-energy concerts the musician has performed over four decades, you'll have to take a seat and recalibrate. The show finds Springsteen, 68, reflecting back on life so far—it's humorous, melancholy, and even therapeutic, for all involved.

"One thing that I miss about getting old," he says, "I miss the beauty of that blank page and of its endless possibilities. That blank page just laying there, daring you to write on it."

He's filled countless chapters in his life by now, and he's here to tell you his story, as he did in his recent autobiography Born To Run... but he's also trying to get through to all 975 people in the room, with messages about life, death, religion and family. It's beautifully cinematic, with your narrator bringing you into his memories using just his words—from being a child and entering a room full of "giants" at the local bar his dad holed up in after work, to the back of a moving pick-up truck watching the stars scroll by as a teenager.

The theater is so small that he's easily heard every time he steps in front of his mic, closer to his captive audience. If you try to audibly participate, he will stop that right away with a quick pause: "I’ll handle this one myself," he said during "Dancing in the Dark" on Tuesday when someone tried to clap along. There is no beer splashing out of cups into the air, no dancing or standing, just you and him—at least that's how it feels—and whatever you are willing to take from the lessons the legend is offering.

You will hear some hits, but you will hear them as you haven't before, stripped down to their skeletons—raw and vulnerable, just how the man delivering them seems to be in this lonely light. They are paired with stories—"Born in the U.S.A.," he explains once again, is "a G.I. blues" song, a tribute to those who went to Vietnam in his place (something he still thinks about, he says). It's a protest, not a celebration, and he performs it with such degree of sorrow that it's almost unrecognizable.

Over the course of the two-hour loose adaptation of his autobiography, you'll be transported from the boardwalk towns of his youth to the coast of California, then back to Jersey again to, literally, find his roots—which are all that's left of his favorite old oak tree. This was a protective piece of landscape in his life, one he grew attached to, but despite its absence from the space it once filled, it ultimately teaches him that nothing can ever truly "be erased." And anyway, there are other trees, other fundamental elements in his life.

"I still carry the Big Man in my heart every night when I walk onstage," he says. "Clarence was elemental, a force of nature in my life." And there's his wife, Patti Scialfa, who performs two songs with him. The first words he ever heard come out of her mouth, he recalls, were from The Exciters: "I know something about love..." It's an anecdote he tells while sitting at the piano, performing just a few seconds of that song, before declaring: "She does." And there's Springsteen, who knows something, too.

The Boss may have never had a boss of his own, but he's always taken his chosen profession seriously and worked hard for all of us—a troubadour absorbing and processing life, trying to translate what all of it means. And if you just listen to his words, even when they're delivered in an upbeat 3-minute radio song, you'll hear what he's really saying. 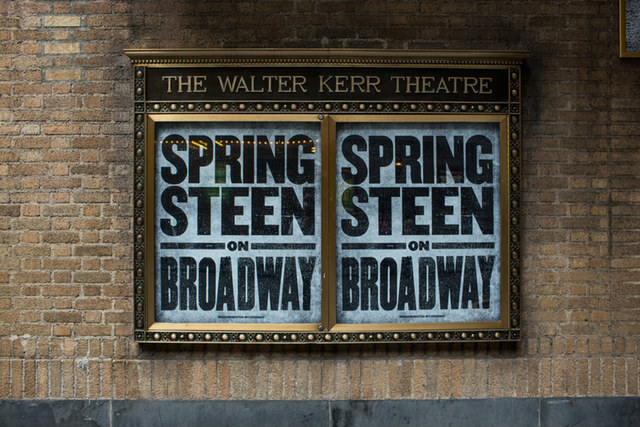 Towards the end of the show, he shifts from the personal to the political for a few moments, addressing the state of the world with an optimistic hope, saying: "Today we're dealing with young men in torch-light parades calling on the ugliest ghosts of our past. And suddenly your neighbors and countrymen look like complete strangers to you. Martin Luther King said the arc of the moral universe is long, but it bends towards justice. I believe that it is true. I believe that what we're seeing now is just a bad chapter in the ongoing battle for the soul of the nation."

#bruce springsteen
#springsteen on broadway
#original
Do you know the scoop? Comment below or Send us a Tip