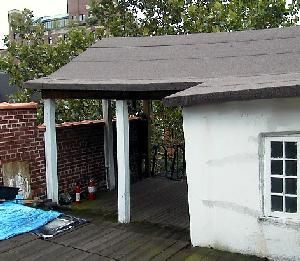 There's nothing more magical than spotting a rooftop house looking down over NYC... well, actually, living in one would be more magical — but for the masses who haven't hit real estate gold, a look is good enough. Curbed points to Apartment Therapy's recent gallery of sky high digs, but scoffs at the absence of this rustic cabin atop 132 West 4th Street.

The historic house was revealed during some recent NYU construction and is now on full display. The site explains, "the quaint little aerie was the work of actor John Barrymore, a longtime Villager who created this secluded 'Alchemist's Corner' in the air nearly one hundred years ago."

NY Daily Photo has a quote from a more recent resident, saying: "As I settled in, I researched my new home. Barrymore had taken up residence in 1917, just before he began performing his legendary Hamlet uptown. Barrymore had remodeled the apartment as a Gothic retreat, christening it the Alchemist’s Corner. He had installed all the false beams, monastery-inspired ironwork, and stained glass, which made his lair resemble a stage set for an Agatha Christie whodunnit in summer stock. The rooftop had been his masterpiece, and had at one time included a garden, with cedar trees, a slate walkway, and a reflecting pool. Of Barrymore’s vision only the cottage remained; he’d likened it to a roost overlooking the spires of Paris."