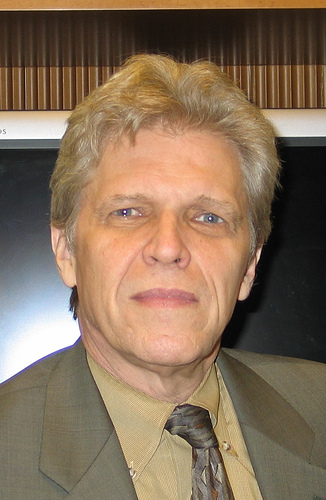 Rev. John Carmichael is the President of the Church of Scientology in New York. We recently asked him a few questions about his church, New York, Theresa Duncan and Jeremy Blake and the subway stress tests.

We're turning comments on for this interview, which is something we don't normally do.

There are a lot of myths that fly around about your religion, could you please tell us about some of the basics of Scientology?
First of all let me say, the best way to find out about Scientology (or anything else, for that matter) is to look for yourself. And that's not difficult - there are several Churches of Scientology in New York; the one at 227 West 46th Street is open from 9 am til 10 pm, seven days a week. Or buy a book -- even get one from the library -- by L. Ron Hubbard. Dianetics (means "through the mind") is the book that started it all in 1950, and became a bestseller and has remained a perennial bestseller. Having said that, here's the short version:

Scientology is a unique and practical religion, one which contains tools people use to lead better lives, lives of greater self-respect and respect for others, greater happiness and understanding. The name means, "study of wisdom," or "knowledge in the fullest sense of the word." So it is about knowing, not believing, and no one is expected to take anything in Scientology on faith.

How this is done is the whole subject of Dianetics (the precursor and substudy of Scientology) and Scientology, and is just too much to explain here. In brief, the Church provides: 1) courses in the fundamentals of life and their application, and 2) a kind of one-on-one application called "auditing" (from the Latin, audire, meaning to listen) -- it's not called counseling, because the auditor does not tell you what to think about your problems or their solution. Instead, you find out for yourself what has kept you from solving your own problems -- and from knowing your own spiritual nature, as well.

Millions of people around the world have found the applied philosophy of L. Ron Hubbard enormously valuable - from dealing with an inability to study, to coming to their own conclusions about the age-old questions about the universe -- so much so, that Scientology and Dianetics now include some 7,500 Churches, missions and groups in 163 countries.

What is the typical timeline for someone joining Scientology?
There doesn't seem to be one route or schedule which is "typical." People generally hear about Scientology and Dianetics from a friend, or they read a book, and it makes a huge lot of sense. They see someone they know being calmer, more energetic, happier, and they say, "I want some of that!" And they come in to a Church, find a course which gives them Scientology tools to handle the area of life they want to deal with, and find it works.

Some people will just read books by L. Ron Hubbard, off and on, for years, before they take a beginning course. Others, eager to change their lives for the better, will dive right in. But when a person applies Scientology to better conditions in their lives, at that point they can fairly consider themselves a Scientologist.

What is the most common reason someone comes to join the church?
Of all the things people are looking for, Scientologists I've talked to about this, say that they were looking for better, longer-lasting, more honest relationships with others. But whether it was relationships, personal stability in life, or just getting an effective perspective on the spirit and life, people who join Scientology do so because they find what they learn is effective.

But there are some people who join Scientology not because they are looking for anything for themselves. They want to help someone else -- to get someone off drugs, or overcome a difficult time in their lives -- and they find Scientology helps them do that.

What can someone expect to learn through the religion that might be different from what one would learn through another religion?
Scientology doesn't claim to have a monopoly on truth. It's focus is different, however, because of its practical methods of helping people reach their own conclusions, and finding their own truths.

Recently a couple, Theresa Duncan and Jeremy Blake, killed themselves. They had mentioned the Scientologists following them - do you have a comment on this?
It's especially tragic when creative people take their lives - their delusions were certainly bizarre.

How many Scientologists would you estimate there are in NYC?
Difficult to know, as we don't have the same kind of rolls as other Churches -- perhaps 40,000 people have taken services at the Church.

What can one expect to walk away with by taking a stress test?
Well, people who participate find it helps them find out what is causing them stress. Obviously, we wouldn't be doing it if it weren't very popular. For some people it is just interesting, for some people -- people who feel that "everything" is stressing them out -- it is a life-saver. If you take a stress test, and find out what's causing you stress, you might want to do something about it. And the person at the Stress Test table will explain how Dianetics applies to that, and urge you to check it out for yourself.

Please share your strangest "only in New York" story.
Truly, the strangest thing I come across in New York, and it happens much too often, is people who say "I am my brain." That's like someone saying, "I am my spleen," or "I am my foot." It's a person saying that he, himself, does not exist. No doubt they think this is "science," or something, but it's just nonsense, and it is bizarre.

Which New Yorker do you most admire?
I most admire one of the executives I work with at the New York Church of Scientology, who has enormous dedication, huge ability to get things accomplished, a keen understanding of people, their strengths and foibles, and a real care about what goes on.

Given the opportunity, how would you change New York?
There are more psychiatrists in this area than anywhere else, and although New Yorkers are too straight-ahead to be completely fooled, we are bombarded by propaganda from shrinks and their allies hoping to justify human rights abuses like the psychiatric drugging of millions of kids in US schools. People should be more informed about what a growing number of medical doctors and human rights advocates are saying about this, for instance at www.cchr.org.

Under what circumstance have you thought about leaving New York?
Never -- where could you go after New York? Not that I haven't thought of going somewhere else in the summer, somewhere cool and green -- but then I'd certainly be bored in a few days!