Report: Chalkboards Now Being Used As Advertising On City Sidewalks

The use of chalkboards for pedagogical purposes is widely credited to one James Pillans, a 19th century Scottish geography teacher who, in 1801, hung a large slab of slate on his classroom wall and used chalk to illustrate his lessons. For over two centuries, the use of the so-called "chalk-board" was confined to the classroom, where generations of educators wasted its potential torturing bored, indifferent students. But now, a revolutionary new use of this ubiquitous teaching tool has been discovered by reporters for the New York Times. 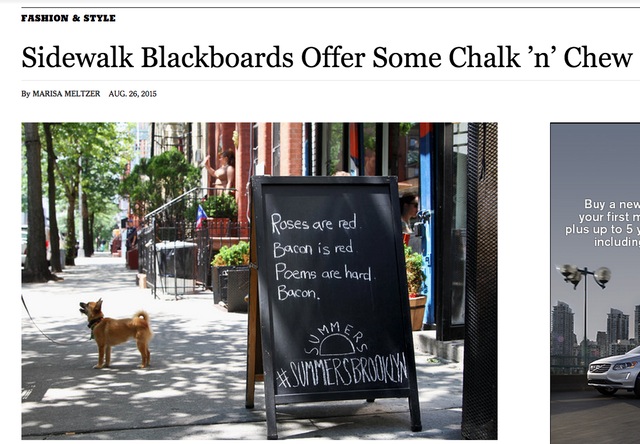 Yesterday, the Times broke news on a new and peculiar phenomenon: area merchants are taking chalkboards out of the classrooms and positioning them outside their businesses in a novel attempt to entice customers inside their establishments. And it appears to be catching on. In an article headlined "Sidewalk Blackboards Offer Some Chalk ’n’ Chew," the Times reports that workers are being tasked to inscribe offbeat advertorial messages on the chalkboards. Using chalk.

The strange new practice has many local residents scratching their heads. Why waste precious manpower and even more precious chalk on such non-productive pursuits? The answer is so simple it's actually shocking no one thought of it before: Nicolas Standish, a Starbucks manager, explains "that the hand-drawn boards give results...it improves overall engagement levels at the store with both customers and partners." You don't need someone to write "ENGAGEMENT LEVELS" on a chalkboard to know what he's talking about, do you?

To be sure, not everyone is happy about this new trend of using chalkboards for sidewalk advertising. Chalkboard purist Claire Carusillo, a Bushwick resident who sees right through your manipulative corporate bullshit, wants chalkboards to stay where they belong, in classrooms and Helen Keller biopics.

"I’m hip to their endgame,” the perspicacious Carusillo tells the New York Times. “They want people to take pictures of their hip chalkboards about hip caffeine addiction and alcoholism, geotag them and put them up. But it doesn’t add to the experience when you walk in.”

Is Claire "Chalk Block" Carusillo right? Do sidewalk chalkboard advertisements pervert the true pedagogical purpose of the chalkboard, while simultaneously adding more commercial clutter to an urban landscape already overcrowded with lurid entreaties to consume? Do they promise a world of whimsy and cleverness that never materializes during your latte order? Deep down, do you think maybe you're the problem?

Or are these new chalkboard ads the inevitable next step for the struggling chalkboard and chalk industry? Please write your opinion down on a chalkboard, take a photo, get the film developed, scan the best photo, and email it to us. We'll upload your photos to the comments next week.

#advertising
#chalkboards
#marketing
#trends
Do you know the scoop? Comment below or Send us a Tip