Replica Of Max's Kansas City Pops Up Like A Mirage In L.A.

At the legendary Manhattan artist haunt Max's Kansas City, countercultural icons reveled, smoked, checked their mail, and bartered for their dinner with pieces of original art. Chance encounters with big names in music, art, fashion, and film were not uncommon. Located at 213 Park Avenue South from 1965 to 1974, then again from 1975 to 1981 (following a brief closure) and a one-year stint at 240 West 52nd Street in 1998, Max's Kansas City retains an enduring counter-cultural mystique. It's partially enhanced by the fact that owner Mickey Ruskin didn't allow photojournalists to hang around, and only let a select few people document the revelry within.

But for one weekend only, visitors to Los Angeles's first annual Frieze Art Fair, from February 15th through 17th at Paramount Pictures Studios, were able to experience a likeness of the elusive, shuttered restaurant. Described as "an immersive pop-up exhibition," people could sip on the same drinks people used to imbibe at Max's, such as Jayne County Punch, as they perused the space.

Yvonne Sewall, a former Max's waitress who married owner Mickey Ruskin, was at Frieze this weekend chatting with visitors and selling ephemera that Max's patrons gifted her over the years. The collection featured works for sale by people who ended up at Max's in one way or another, including conceptual artist Lawrence Weiner and Anton Perich, a busboy-turned-photographer who had a rare look inside. 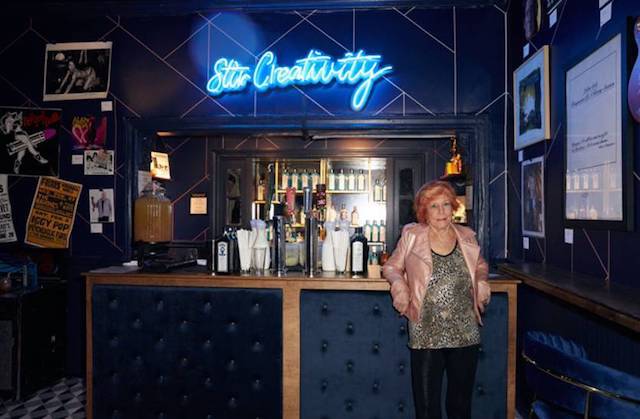 Yvonne Sewall, pictured in front of the bar at the Max's pop-up. Photo by Isaac Sterling for Matte Projects.

The proceeds went to the charity she established in Ruskin's memory, the Max's Kansas City Project. The fund distributes emergency grants to creative people in need, and provides resources for teenagers in the arts.

Located in a townhouse on the Paramount Studios lot, the pop-up resembled Max's back room, as Sewall tells Gothamist. Within the Max's Kansas City hierarchy, the back room—"more like the theatrical room," as Sewall puts it—is where Andy Warhol's crew frequently coalesced, alongside musicians and rock critics. While the pop-up didn't resemble Max's exactly as it was (by design, it couldn't have—the real Max's was far bigger) Sewall says she found that it evoked a similar spirit of the long-defunct place's back room. "The mix of the people was really incredible...I do feel that that was the case, and that is how it was similar to Max’s," Sewall says. "Once you walked through those doors, you were treated with respect and you were treated like a star." 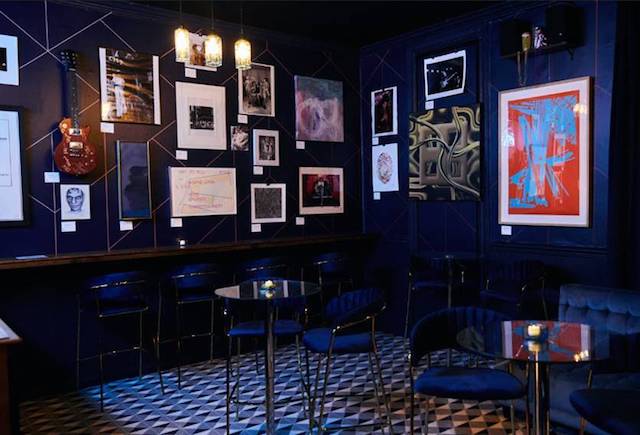 Artwork by Max's alums, such as Leee Childers, were on sale in the space. Photo by Isaac Sterling for Matte Projects.

It's curious that the concept landed in Los Angeles, rather than New York. But Sewall, who lives in Kingston, New York, says that prior to displaying the show in L.A., she had initially contacted a handful of local galleries and museums in the city, inquiring about the possibility of building a Max's Kansas City pop-up and displaying the pop culture trove. No one bit. Sewall says that at one point she lit candles, and that "all those Max’s alumni on the other side said, 'We gotta get Yvonne a helping hand here.'" It happened, she says, when Bombay Sapphire contacted her with the idea to have a room "inspired by Max’s," with art and a bar. That led to the Frieze L.A. pop-up.

"That was really my vision in showcasing," Sewall says. "The sales weren’t as important to me as getting the visibility because I had felt that it belongs as a collection and it should be in a museum, in a room dedicated to Max’s, or a club similar to what the House of Blues was in L.A. where they had the VIP room upstairs." She says Ruskin never turned away anyone who couldn't pay for a meal, and let certain artists open tabs at Max's in exchange for their art, which he hung from the ceiling or on the walls. "There was a John Chamberlain sculpture up front that was welded auto parts, and they finally had to move it because waitresses were always snagging their stockings on it," Sewall remembers, laughing.

Sewall hopes to bring a Max's Kansas City pop-up home to New York sometime in the future, but when, and how, remains to be seen. She ultimately wants to build up funding in her organization, to help artists, and hopefully partner with other organizations—she also has a podcast in the works called "Drop Into Max's," and is involved with a documentary being made about the legendary restaurant. Sewall sold the trademark to the Azrak Capital Group (the same group that took over CBGB's lease), but kept certain rights, including the nonprofit. In the near future, though, Sewall is envisioning having a "raucous" night of storytelling with Max’s former waitresses that will bring the space to life once again, through the people who knew it best.