The heavily industrial neighborhoods of Mott Haven and Port Morris in the South Bronx, just north of Randall's Island, have been getting considerable attention this year, both from large-scale developers, and gentrification-endorsing New York Times reporters.

These are the sorts of changes that inevitably result in these sorts of quotes appearing in the NY Times: "I said, never, ever, over my dead body, would I ever live in the Bronx... but everybody is so cool, and so laid back, and it has everything you want in a neighborhood," one Bronx newcomer said this spring. But, as is sometimes the case (and sometimes not), real-estate trendiness and green spaces come hand in hand.

Today, the New York Restoration Project released its first, preliminary renderings of The Haven Project: a green-ification plan, one year in the making, that includes a Harlem River and Bronx Kill waterfront park accessible from 134th Street, and better access by foot and by bike to the forthcoming Randall's Island Connector—a long-stalled pedestrian footbridge that will connect the two neighborhoods, set to open later this summer. 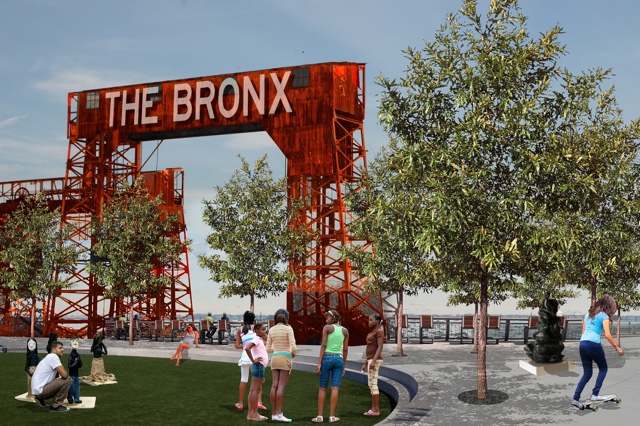 A facelift for the exist Port Morris Gantry at 134th Street (via Civets Inc.)

The plan also includes safer crosswalks and bike routes to traverse the neighborhoods' numerous highways, and public art installations along the waterfront. NYRP, which is currently seeking funding both from private organizations and the city, says that it has worked closely with community groups to devise the plan, and is hoping that waterfront access, strategically placed trees, and trails will have long-term health benefits in two neighborhoods where large factories are heavily concentrated—according to NYRP documents, air quality is better along the waterfront, where wind disperses pollutants.

But while renderings are nice to look at, the project's cost, and timeline, are still up in the air. Curbed reports that the first hurdle, the park and pier at 132nd Street, is likely to cost $5 to $10 million. Even if that funding materializes in full, ground isn't expected to break until 2017.

#South Bronx Water Front
Do you know the scoop? Comment below or Send us a Tip