On Saturday we headed to the SiriusXM studios on 49th Street to celebrate the 20th anniversary of Nevermind, and the start of our own midlife crisis. (How was that twenty years ago?) On hand were Krist Novoselic, Dave Grohl, Butch Vig (the album's producer), a few handfuls of listeners and press, Jon Stewart (who was moderating), and so much free wine. So much.

Sadly, the open bar made the audience a little chatty, and it was difficult to hear anyone inside of the glass box they were broadcasting out of. Instead, we drank the aforementioned wine and admired Novaselic's professor look (really, we're into it!). Right? 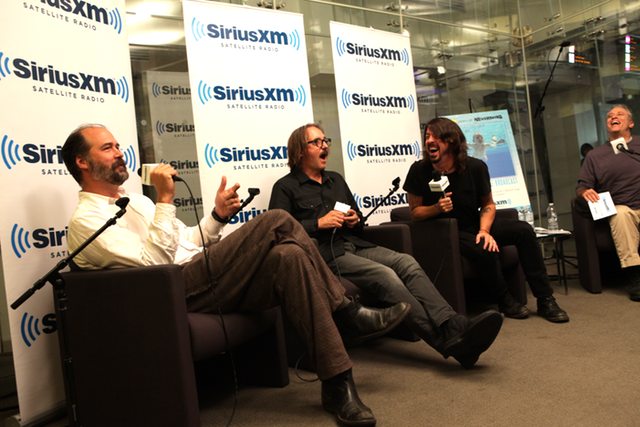 Stewart started the show off recalling the first time he heard the album, saying, "I couldn't believe it. It had everything —sonic menace, melody, urgency, irony. It was like the Beatles had swallowed Black Flag. I couldn't wait to love them, and then watch everyone else love them and then be really mad at them for everyone else loving them, while myself still secretly loving them." While we await a full transcript, check out the below video.

If you have access to Sirius, the two-hour show will reair tomorrow at noon, on the Nevermind Radio channel, naturally.

#butch vig
#dave grohl
#Jon Stewart
#krist novaselic
#nevermind
#nirvana
#sirius
Do you know the scoop? Comment below or Send us a Tip