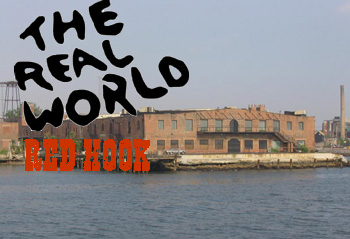 While MTV is keeping mum on the whereabouts of the upcoming Real World Brooklyn location, the borough is all wise to the fact that they're setting up camp in Red Hook (after not moving to Carroll Gardens or Downtown's BellTel Lofts). The Brooklyn Paper asked some residents how they felt about their new future neighbors, who will reside at Pier 41 at 204 Van Dyke Street.

“I’d rather have another Ikea,”

said John Varonian, who has lived in Red Hook for two years, and would prefer that MTV reopen and run the Laundromat down the street.

“They came in to ask us to sign a waiver last night,” said barista Claire Moore from the popular coffee hangout, Baked, on Van Brunt Street, adding that the producer was excited to find such a “cute” place to set a scene for laid-back Red Hook life.

Or as one Red Hook reader tells us: “I think I'll be moving to Manhattan next. Less hype. Less bullshit. Slightly fewer douchebags. And probably cheaper. Did you know Manhattan is the new Brooklyn?” So far, the grumblings are understandably much louder than the cheers over the network coming in to the neighborhood. Chin up, locals, maybe you'll get invited over to the sand pit?

#locals
#mtv
#Pier 41
#reality tv
#red hook
#residents
#television
#the real world
#tv
#viacom
Do you know the scoop? Comment below or Send us a Tip