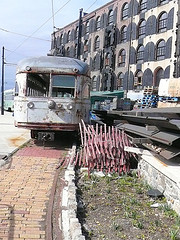 Well well well, when we reported in August that Lido Bar in Red Hook would be closing we were met with many emails and comments stating this was 100% untrue. Bar manager Molly Franklin even held strong that Lido Bar would remain open and that this was nothing more than "bar gossip."

Earlier this week we received an email from one of the "insiders" stating "Lido actually *is* closing in the next couple weeks (next Friday?). Sounds like your information was better than mine/ours." It's a shame that some of the neighborhood mainstays are shutting down, an email to Franklin wasn't immediately returned today but when we interviewed her she mentioned the continuous struggle of being a small business in the 'hood:

"The toughest part for the businesses along Columbia Street is the never ending road work. We went from being a two-way street to a one-way until the indeterminate end of the project, and during the summer of 2006, the entire street was effectively shut down. You can't fight city hall, and doing so as a small business is nearly impossible. Infrastructure changes are vital to the expansion of the neighborhood, but it is being done to encourage growth opportunities for big companies and developers."

Yesterday BrooklynVegan reported on another sad loss for the area which we also mentioned in August, The Hook. We just saw Broken Social Scene play the intimate venue last year, a few months before Styx took the stage! The owner has now stated that there will be one final party on October 27th, BV notes "strangely - it will be a Halloween party called 'The Death of Astroland' - 'a laying rest of the Coney Island we all once knew'. So basically the final party at the Red Hook venue will be in honor of the closing of Astroland in Coney Island." Of course, yesterday it was reported that Astroland will be open for another season. Red Hook can't seem to catch a break lately, maybe if they just got those trolleys up and running again...