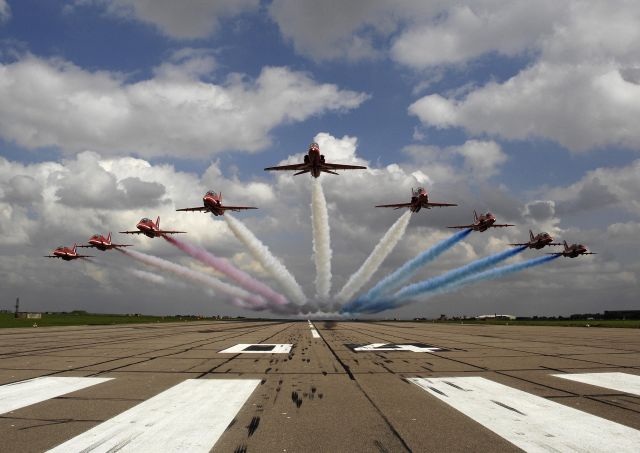 The world-renowned British Royal Air Force Aerobatic Team, the Red Arrows, will fly over our skies later today. The 25-minute show will begin at 6:30 p.m. over the New York Harbor, and the spectacle is best viewed from the shores of South Beach on Staten Island. At 6:55 the nine-pilot team will make their way towards the Statue of Liberty for a flyby (which will occur at 6:58), so if you can't make it to Staten Island, there's still a chance of catching a glimpse. From the press release:

The Red Arrows Statue of Liberty flyby at 6:58 pm will be at a northeast direction, coming up New York harbor, past Brooklyn/Staten Island, the Statue of Liberty, and further up the Hudson River. The Red Arrows will then turn around and retrace their steps, flying back to the Atlantic Ocean the same way they came in.

Bloomberg stated that he's looking forward "to a spectacular showcase soaring above the greatest skyline in the world." While this year marks their 44th display season, it's the Red Arrows first-ever aerial display in New York City!