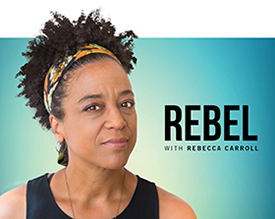 Incidents of police violence targeting black and brown people continue to occur throughout the country, but the conversation about how to stop them from happening feels stalled.

In his first feature-length film, Monsters and Men, Reinaldo Marcus Green presents three different perspectives on a police shooting that is captured by a bystander. It's a refreshing—and harrowing—look at how vastly different we experience something that we might assume to all feel the same way about.

Listen to Rebecca Carroll talk to Green on WNYC about his new film, below.

As a native of Staten Island, Green was especially affected by the 2014 police killing of Eric Garner in front of a neighborhood deli that was very familiar to him. The film, in fact, was sparked by a conversation about Garner that Green had with a friend, who is also a police officer.

"What started out as a conversation between two friends ended in a pretty heated debate," Green said, noting that his friend talked a lot about what the job was like. "It ended up with my police officer friend basically in tears. It was a pretty powerful thing."

Green said it would have been easy to dismiss his friend's viewpoint. Instead, "It made me uncomfortable. I think it will make a lot of people uncomfortable. But it's important. Sometimes I think we need to get to that place of discomfort in order to move past it."