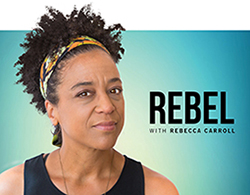 This week's Rebel interview is with soul singer and rising a cappella star Madison McFerrin, who is also the curator of a month-long residency at C'Mon Everybody called The Sissieretta Series. The series, which pays tribute to the 19th century soprano Sissieretta Jones, features weekly performances by women artists of color; (January 23 and January 30 are the remaining dates).

About her choice to call it the Sissieretta series, McFerrin says it's about remembering Jones's contribution to America.

"We decided to name it after Sissieretta because nobody knows about her anymore. There are no known recordings of her singing. So people have completely forgotten about her. It was really important to honor her in a way that uplifted her spirit and just to show, especially women of color, we're out here doing things. You should pay attention to us."

#madison mcferrin
#rebel commentary
#rebel with rebecca carroll
#The Sissieretta Series
Do you know the scoop? Comment below or Send us a Tip