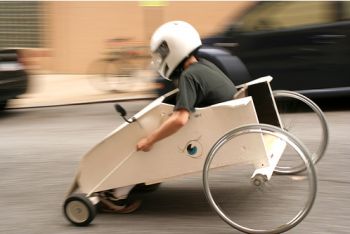 Speed demons unite! The Paping Soapbox Derby is less than a month away, and The Brooklyn Paper reports that this year it's back in Brooklyn and all legit.

Last year, derby founder John Mejias had to relocate the event to Manhattan when the NYPD stepped in, but now the 6th annual race will be back on Columbia Heights' "Suicide Hill" (which is located between Middagh and Doughty Streets). Apparently Mejias got around any issues because a "friend had secured a city film permit and will capture the action as part of a documentary on 'kinetic sculpture'...[the derby] has the sanction of the mayor’s office despite continuing opposition."

The event's main opponents, locals at the Watchtower Bible and Tract Society, said they “certainly have no objections to the derby itself,” but are “concerned about our liability…that could occur in connection with our building.”

Alas, derby downers, the hill will be closed for the August 23rd event, and it looks like nothing is going to stop the gravity-fueled vehicles from racing down it. Here's a highlight reel from the last time it was on "Suicide Hill."