Yesterday, I spotted what (at first glance) appeared to be a napping rat climbing the ranks on Reddit. Recalling the mouse from If You Give a Mouse a Cookie approximately 20 points into his snowballing list of demands, this little guy had bedded down inside an abandoned sneaker and seemed to be reclining in sleepy bliss, tuckered out after a full day of trash snacking and wire chewing probably. All that's missing is the tiny sleeping hat.

Now, I think most of us—certainly not all—will agree that NYC rats, with their blank beady eyes and their greedy scraping claws and their brazen habit of getting WAY TOO CLOSE to commuters on the subway, are gross and should go.

Captured in repose, Shoe Rat looked, I hate to say it, kind of cute...? Kind of relatable, having found a place to sneak a siesta in this impossible-to-nap city. Shoe Rat has not yet attained the size of a baby capybara, after all; Shoe Rat is just a very small rat cruisin' for a snoozin'. In a shoe! What is this, an Aesop fable? I mean come on.

Of course it's not.

Let's lean in for a closer look. We've seen that face before: Remember Sad Rat, entombed for all eternity in a sidewalk crack? As you probably guessed, this rat is not sleeping. This rat has gone to that great garbage party in the sky. This rat is in a better place now. 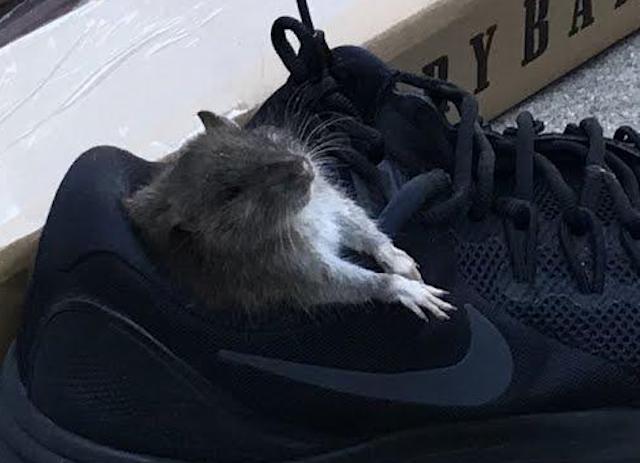 Shoe Rat's original photographer, Moshe Bildner, spotted our dearly departed while walking to the A train at Nostrand Avenue. "I saw something furry in the pile of garbage and looked down wondering if someone had thrown away something fancy; it was a rat in a shoe," Bildner told Gothamist in an email. "The rat was already there and did not move the whole time I was there. The rat was for sure dead."

Still, burning questions remain: How did Shoe Rat get in shoe? Did Shoe Rat crawl in there to die, seeking a more peaceful, private, and dignified fate than awaited him out in the gutter? Or did someone find Shoe Rat's tiny corpse and make an executive decision as to its most suitable final resting place? And if that latter explanation proves the correct one, then who put the dead rat in the shoe?

In the end, though, death's secrets are not for us to know, and I will need to learn to live without closure. So pour one out for Shoe Rat: RIP, Shoe Rat, we hardly knew ye.

#mystery
#rat
#rats
#sad rat
#shoe rat
Do you know the scoop? Comment below or Send us a Tip