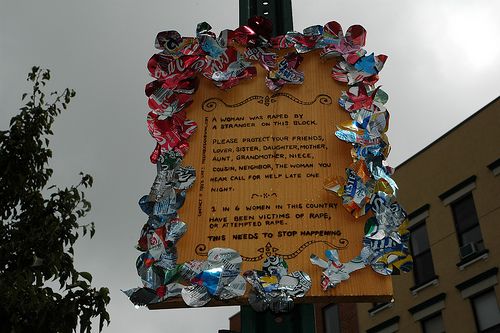 Getting inspiration from the Ghost Bikes around town, a 26-year-old female artist has hung a handmade sign on the corner of Meserole and Humboldt in Brooklyn. This is her first piece of street art, and it reads: "A woman was raped by a stranger on this block. Please protect your friends, lover, sister, daughter, mother, grandmother, niece, cousin, neighbor, the woman you hear call for help late one night. 1 in 6 women in this country have been victims of rape or attempted rape. This needs to stop happening." The message is burned into a piece of wood, and surrounded by flowers made from cans.

The creator of the sign also included an email address to contact her at, but remains anonymous because her own rape case, where she was held captive in her apartment for five hours, is still in court. She told ArtCal that her ambitious goal is for "rapists to realize that the act that they commit is unforgivable, and is an obscene expression of power over another person. I hope that they will come to this realization when they think about the possibility of their loved ones becoming victims of rape. I also hope that other rape victims will contact me to put a sign up in their neighborhood. It is important to spread community awareness, as well as to empower the victims by allowing them to take an active role in preventing it from happening to others." Though she added that she worries "people would be so afraid of the subject that they would deface the sign." [via Williamsburg is Dead]

#anonymous
#brooklyn
#rape
#sign
#street art
Do you know the scoop? Comment below or Send us a Tip