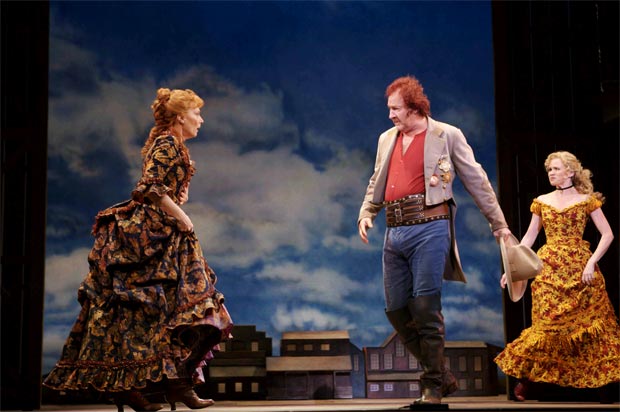 If the would-be Broadway-bound musical Lone Star Love is half as entertaining as the backstage drama, then sign us up: Randy Quaid, the show’s former star, has been banned from the Actors' Equity union for life because of abusive, lewd and just plain crazy behavior during the show’s Seattle run. Quaid has also been fined $81,572, which equals two weeks pay for the cast of the $6.5 million show; producers claim they had to prematurely close because of Quaid’s hi jinks. The Post’s Michael Riedel got the rap sheet:

Quaid says the actors are part of a “pinko-commie organization” trying to destroy him. And it gets even better: Sources tell TMZ that Quaid’s wife Evi turned up at the Equity hearing for Quaid and “berated several Equity staff members, including a 76-year-old receptionist whom she allegedly kicked in the shins, drawing blood.” Evi says Equity staffers broke her finger while trying to bar her from the meeting; others say she was a screaming lunatic raving about a “Nazi plot” against her husband. (Are they commies or Nazis? Try to stay on message, Quaids.)

Riedel also hears that Evi e-mailed several actors in Lone Star Love, threatening to sue them unless they dropped the charges: “You have one last chance to stop this onerous campaign or else you will be drawn into a legal quagmire.” And she's even been on a calling campaign against the Commie Nazis; one actor reports trying to end an angry telephone harangue from Evi by saying, “I'd like to terminate this call.” Evi allegedly responded, “I'd like to terminate your existence on this planet.”

By the way, the couple's roots are in Broadway, so to speak - they met while Quaid was filming The Bloodhounds of Broadway (Evi was his driver).

Update: The Quaid's lawyer sent letters to The Post and Back Stage East to clarify some details - check it out here.