It's been too long since we've indulged in a ridiculously comprehensive Radiohead conspiracy theory, but it's time to strap in for some [Radiohead] game theory: fans are abuzz that a series of mysterious "More Fear" posters, which have appeared in major cities around the world in recent weeks, are signs that the band is planning a 20th anniversary release for their classic, OK Computer. It's...just like... a jigsaw... falling into place...

Posters are appearing worldwide that might be related to the anniversary of @radiohead's OK Computer, but nothing confirmed yet... #morefear pic.twitter.com/s0GvOTHgvW

But before we dive down the rabbit hole, we must address all the reasons why this could all be nothing more than a beautiful delusion. First: Radiohead fans, moreso than many fandoms, are particularly eager to buy into conspiracy theories about the band (Did Kid A predict 9/11? Jury is still out), both because of their own paranoid nature AND the band's predilection for shenanigans like sending witch leaflets to fans and scrubbing their internet presence before a big announcement. Of course they would put up posters without telling anyone and wait for fans to figure it out! Second: we've been burned before by Radiohead rumors (remember when they were supposed to play Occupy Wall Street?). Third, and most importantly: fans have also been burned by their foolproof, deeply researched Radiohead theories, most prominently in 2011 with The King Of Limbs pt II. So there's at least a 49 percent chance none of this is even related to Radiohead in the first place.

The posters, which have shown up in Berlin, London, Amsterdam, Brooklyn and more so far, all feature the dates "1997 - 2017"; OK Computer was released on May 21st, 1997. The propagandist text is all of a piece with the political themes of that record (especially "Fitter Happier"), and generally seems like something the younger, angsty Radiohead would be really into. Even more compelling: fans on Reddit found a piece of OK-era concept artwork (compiled online almost five years ago) with this similar picture; as you can see below, it is basically the top right corner! 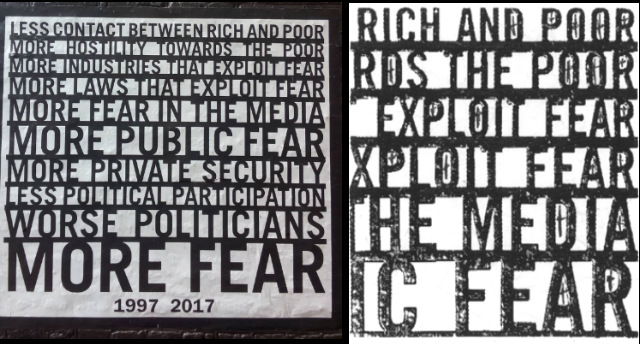 The mysterious poster, left (via Mpghann); the piece of "OK Computer"-era artwork, right

STICK WITH ME HERE.

In addition, the locations of the posters seem to correlate with the offices of Beggars Group, of which XL, Radiohead's label, is a part of.

Then there are some more incidental rumors that line up with all this: last year, someone posted on the Radiohead Reddit board about a possible OK reissue coming this May: "I heard from someone with connections to the band (I am being intentionally vague) that an OKC reissue was in the works with extra unheard and unreleased tracks." (As for what could be on the reissue: there's a long list of legendary songs which were recorded/attempted during the OKC sessions, and which fans have been clamoring for, including "Lift," "I Promise," "Big Boots," "Follow Me Around," and the original versions of "Last Flowers," "Nude" and "True Love Waits.")

The band's longtime producer, Nigel Godrich—who may or may not be "Chieftan Mews," the ultimate Radiohead social media troll/prophet—also tweeted a photo of his OK-era recording notebook last month. It seemed innocuous at the time, but in light of these rumors... why would he randomly be scrolling through old OK notebooks? And in particular, looking at a song which "didn't make it anyway ;)" ??

A page from my notebook from recording OKC... old school pre computer editing.... this song didn't make it anyway ;) pic.twitter.com/ViaSKD49jR

The NME has picked up on the rumors as well, and contacted Radiohead's PR for a response. So far, our attempts to psychically reach out to Johnny Greenwood for some clarity have gone unanswered as well, but we will keep trying.

There's still a very good chance this may turn out to be nothing, but the connection between the old artwork and this new poster, combined with the OK Computer anniversary, has gotten us piqued. And if it turns out to be an art project which has nothing to do with the band, well, at least we still have Thom Yorke dancing to "Gasolina."

Radiohead covered Gasolina and now they're my favorite band of all time pic.twitter.com/uSA6jYkP03

(Yes, we know the snippet above is fake, but please also point out that it's fake in the comments.)

#conspiracy theories
#jump down the rabbit hole
#king of limbs pt II pt 2
#Music
#ok computer
#radiohead
#rumors
#original
Do you know the scoop? Comment below or Send us a Tip