Radiohead Has Announced More U.S. Shows That You Probably Won't Get Tickets To

In September, Radiohead finally came back to the States, playing two rather intimate shows at New York City's Roseland Ballroom (with a brief rumor that they'd also be Occupying Wall Street). Despite their best efforts, tickets still sold out in seconds, and scalpers still got their hands on a bulk of them (prompting City Councilman Dan Garodnick to propose what we're calling "The Radiohead Law"). Fans consoled themselves with rumors that the band would be back as soon as next year, however... and so they are. Today they announced the first half of their U.S. tour, which will begin in February of 2012.

So far no New York dates have been announced, but it's only a matter of time. The question is: where will they play in the city? And will we have to trade part of our soul for a way in again? We're running out of soul, people.

For those interested in traveling across state lines for a show (escaping New York City in the winter for a Radiohead show in Miami doesn't sound terrible, after all), they "have a number of tickets available through w.a.s.t.e on Wednesday 9th November. The shows go on general sale on Saturday 12th November." 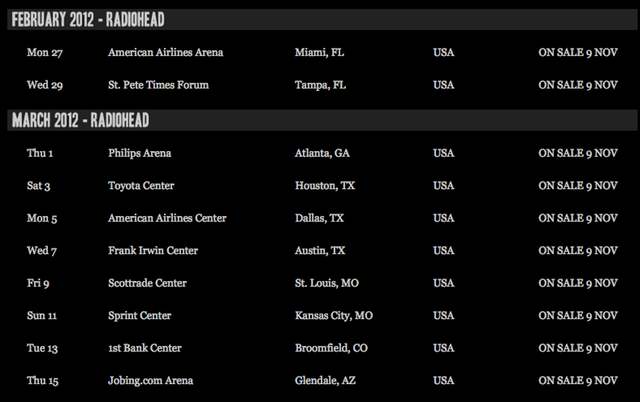 #i feel my luck could change
#radiohead
#tickets
#tour
Do you know the scoop? Comment below or Send us a Tip