Two subway musicians have filed a lawsuit against the city, accusing an NYPD officer of threatening them when they tried to legally busk, and then insulting them online. But what's really provocative about the lawsuit is that Heth Weinstein and Jed Weinstein are convinced that the cop, identified as Officer Isaac Valdez, also left a series of extremely racist, homophobic comments on various YouTube pages. Heth and Jed say Valdez's belligerent fixation with them began when they tried to perform in the subway under Grand Central Terminal using a "permit" issued by the MTA's Arts for Transit program. They allege that these repeated clashes with Valdez led to the discovery of a shockingly bigoted side to Officer Valdez.

As the lawsuit makes clear, busking is permitted in the subway as long as it does not "impede transit activities" or exceed a certain decibel level. An Arts for Transit "Music Under NY" [MUNY] permit is not required by law, but the existence of the MUNY program confuses many beat cops. "Some officers recognize the certificates, others won't, and others recognize them arbitrarily based on their musical tastes," the suit argues (accurately, in our experience). 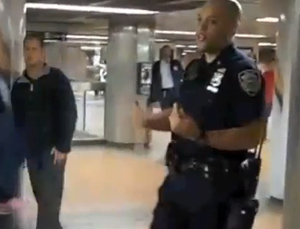 Enter Officer Valdez, who did not particularly care for Heth and Jed's groovy musical stylings. They had a precious MUNY permit, but they say Valdez would repeatedly interrupt their performances and order them to disperse, making such comments as: "You dress like shit." Also: "You are too old to make it in the music business." (Heath and Jed are in their mid-forties.) And: "You're not good enough to be on American Idol." Then, finally, a most palpable hit: "You guys look like a dirty version of the Goo Goo Dolls."

During one alleged "diatribe," Valdez told Heth and Jed he lived in Staten Island and that he had seen them playing on the Staten Island ferry on his way home. They clashed repeatedly with Valdez throughout 2010 and 2011, until last September when Valdez allegedly approached Heth and Jed in Grand Central and told them to scram. Fed up, they demanded to know what law they were violating. In response, Valdez allegedly grabbed his badge and said, "That's the law right there. You're lucky I have a gun and a badge, because if I didn't it would be a different story." Here's video of that encounter:

The lawsuit alleges "this was [Officer Valdez's] way of being tough and saying that if he weren't on duty he'd beat them up." That night, someone using the YouTube profile "idvg8314" posted a comment on the Heth and Jed YouTube page, repeating what Valdez had allegedly told them in Grand Central: "You guys look like a dirty version of the Goo Goo Dolls who need some sleep." Deducing that this was Officer Valdez, Heth and Jed traced "idvg8314" comments through YouTube, finding some "dreadfully nasty things." Such as [sick]:

And so on and so forth. The Internet really brings out the best in people, eh? Heth and Jed and their attorney, Gregory Antollino, are "100% certain" that idvg8314 is Officer Valdez, and the lawsuit, which you can read in full below, explains why. But the "piece de resistance that proves that idvg8314 is Valdez is that Valdez used that moniker on another website, including a design website where people can post pictures of their homes and solicit design suggestions.

"On that website, Valdez identifies himself as being from Staten Island, and has several pictures of the rooms in his three story townhouse. In some of the pictures, there are family photographs, and in them you can see the physical outlines of Valdez's figure: A muscular bald man, light skinned Hispanic." Heth and Jed also allege that after taking their complaints to the NYPD Internal Affairs, "the idvg8314 YouTube account came down within days of the complaints."

"Officer Valdez’s actions toward Heth and Jed is yet another sad example of the discourtesy, unprofessionalism and disrespect that the NYPD shows to citizens on a daily basis," Antollino, their attorney, tells us. "His hateful attitude toward minorities is common among police officers — even minority officers like Valdez. The only difference is that Valdez made the very poor choice of spending his off-time harassing my clients and leaving a trail of nasty comments that lead directly to him." The lawsuit chillingly concludes that Valdez "clearly has a dangerous mind, and he knows of their IAB complaint."

#busking
#heth and jed
#MTA
#subway performers
Do you know the scoop? Comment below or Send us a Tip