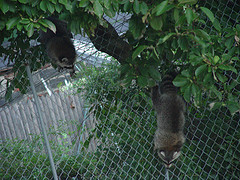 As Park Slopers discuss the elementary school pigeon killers lurking about Prospect Park, the animals decide to strike back!

The NY Post reports that "a masked marauder" was on a rampage yesterday in the Park as he took a bite out of a woman who was on an outing with her family at The Lake.

The animal had been lurking unusually close to people when it struck, sinking its teeth into the woman's thigh. Her husband managed to pull it off and then it fled.