Quit Horsin' Around & Dig Your Spurs Into BoJack Horseman

At first I wasn't all that into BoJack Horseman, the peculiarly dark animated Netflix series that premiered all the way back in August. Not enough jokes landed for me in the first few episodes, and it wasn't immediately clear that the show was steadily developing along a surprisingly sad narrative arc. I enjoyed the milieu—a washed up actor from the '90s sitcom Horsin' Around is spiraling darkly downward in the hills above Hollywood—but despite my fondness for The Muppet Show, The Far Side, and Charlie Sheen, I couldn't quite roll with the interior logic of anthropomorphic animals inexplicably intermingling with humans in Hollywood. Yet it was just intriguing enough to keep me coming back.

There wasn't one specific ah-ha moment where I was hooked, I think it was just a matter of acclimating to the absurd parameters of the BoJack Horseman world, and the pace of the comedy, which is much more slow-burn than other animated shows. Raphael Bob-Waksberg, who created the series, seems more interested in eliciting a steady chuckle than marching the audience to a drumbeat of broad set-ups and punchlines swinging for the fences. Which is to say that an animated series about an alcoholic horse/man celebrity who fornicates with cats and humans is remarkably subtle, and keenly focused on relationships, heartache, and long-form character development.

To be clear, BoJack Horseman is very funny; I wouldn't have watched all 12 episodes twice if it wasn't. But it downplays the humor ever so slightly, in a way that's unusual for cartoons. Some of the subtler jokes and sight gags fly by before you can really take them in (check out BuzzFeed's 136 Hidden Jokes You Probably Missed On “BoJack Horseman” for more on that), and other jokes are cryptically set up in earlier episodes only to pay off further down the line.

I'm surprised the series hasn't gotten more buzz—anyone with a taste for dark comedy won't regret pulling up a stool next to BoJack. As Vulture's Margot Lyons put it, BoJack is "one of the most aggressive portraits of depression I think I've ever seen. Look past the anthropomorphic animal characters and the satire of toxic celebrity culture: This show is radically sad. I love it." As if to prove her point, last week Netflix announced the surprise release of a Christmas episode with this clip:

Will Arnett, who back in the day was also in a very famous TV show, stars as BoJack, supported by a stellar ensemble of comedic and dramatic actors, including Breaking Bad's Aaron Paul, who in addition to playing BoJack's beleaguered hanger-on, helped produce the series. Amy Sedaris voices BoJack's feisty feline agent Princess Caroline, Patton Oswalt is the desperate book editor penguin banking on BoJack's memoir to save his floundering publishing company (Penguin, of course), and Alison Brie is BoJack's sympathetic ghostwriter Diane Nguyen (one of the series' best episodes is brilliantly titled "Live Fast, Diane Nguyen").

There are also repeat appearances from Wyatt Cenac, Anjelica Huston, Stanley Tucci, John Krasinski (hilarious as BoJack's idol, Secretariat), Paul F. Tompkins (Mr. Peanutbutter, BoJack's unbearably upbeat canine rival), Naomi Watts (playing herself), and Wallace Shawn (also playing himself, but with a crippling Rothko addiction). Shawn [SPOILER ALERT?] is ingeniously cast to portray BoJack in a biopic about Mr. Peanutbutter's ostensible theft of the letter "D" from the Hollywood sign. BoJack is cast as Mr. Peanutbutter. The movie is directed by Quentin Tarantulino, an anthropomorpthic spider version of the famous Pulp Fiction director. The whole thing is insane and perfect. 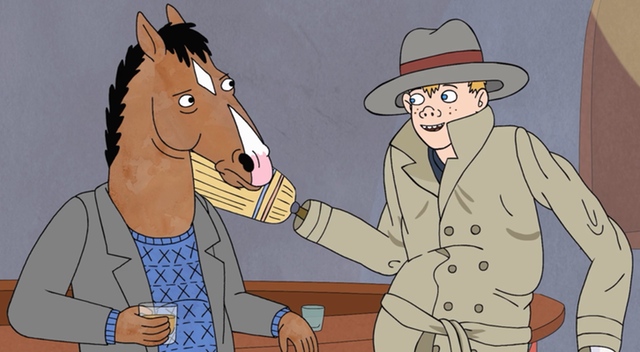 Speaking of perfection, Arnett is the dark center of gravity here, and his deep, gravelly voice serves the story well, grounding the daffiness with weighted, world-weary cynicism. BoJack's floating through life on a steadily-diminishing wave of relevance, an isolated hack who everybody knows but nobody cares about. He's lonely and adrift, nasty and then contrite, with only his enormous ego keeping the self-loathing at bay. In the season's sensational penultimate episode ("Downer Ending"), he resurfaces from a phenomenally-rendered drug binge to realize how isolated and empty his life has become. Begging Diane for validation, Arnett's raw voice seems to crack open in a scene that's suddenly emotionally moving in a way that no cartoon about an anthropomorphic horse has any business being.

Did I mention the opening credit sequence, scored by Patrick Carney of The Black Keys, is mesmerizing?

The great thing about these Netflix series is that you can ignore them for months and then, at the behest of some rhapsodic blogger or annoying boyfriend, tear into them all at once like a thoroughbred trapped in a stable with a trough full of sugar cubes. Since it debuted in August, I've already watched all 12 BoJack episodes twice, yet I'm met with blank stares whenever I try talking BoJack with most people. This will hopefully be corrected with the arrival of Season Two, currently in the works, but for now BoJack Horseman remains one of the most criminally underrated shows on "television."

#bojack horseman
#netflix
#tv
#original
Do you know the scoop? Comment below or Send us a Tip