Python in the Pipes! 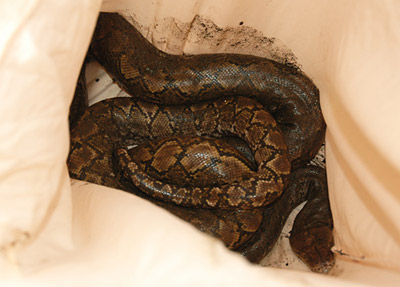 Boing Boing has a story that borders on an urban legend we once heard. Nadege Brunacci, owner of Pit Stop in Brooklyn, found a snake in her home's sewage pipes -- and not just any snake, a very large python!

Brunacci sent out an email explaining the incident (in her own special French way) to her friends, saying: "monday night after 2...3.... beers i did need to go 'pipi' did not put the light on .....i was in mi hom....got up and don't know whi look back in the toilette....this is what was in my toilette (pictured). i did 'pipi" on a python." We asked Brunacci's ex (who tipped us off to the story) where the snake may have come from, but he told us "No one knows where it came from. Its either an escaped or released pet and it could only have gotten into her bowl via the pipes (eek!)." Eek indeed! He also told us "the police weren't involved for the final removal and were dubious at the first report."

The slithery creature was saved from a suffocating fate when a plumber came in to cut open the bottom of the toilet -- where they found the 7' python curled up in the pipes. Luckily Brunacci is an animal lover and took the snake "to a friend who takes care of animals." We're told that "its now doing fine and is named after Nadege. The woman who first pee'd on it."

#animals
#boing boing
#brooklyn
#friends
#News: NYC
#Pit Stop
#police
#The Police
Do you know the scoop? Comment below or Send us a Tip